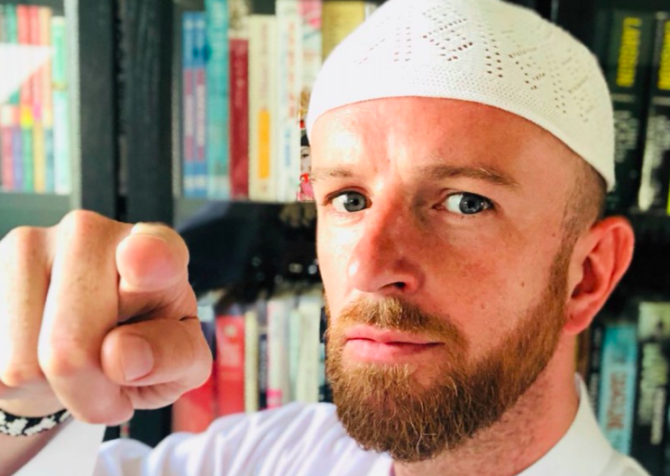 Drew Dalton is a bisexual Muslim from the U.K. And if you think that’s an oxymoron, think again.

“I always felt I stood out a little bit on the ‘gay scene’ because I was bisexual,” 38-year-old Dalton tells Gay Star News in a fascinating interview.“Add on the Islam and you’ve got a hard road ahead of you.”

Dalton works as a lecturer in sociology at the University of Sunderland. He is also the chair of Hidayah, a support organization for LGBTQ Muslims.

He first came out as bisexual when he was 18. He converted to Islam years later after one of his best friends died tragically.

“I’d lost my best friend, I was out of depth about my place in the world. You start to question a lot more things,” he recalls. “I needed some solace, so I started to think more about Islam.”

“I felt that I was coming out twice,” he recalls. “Islam was a lot harder for me because you kind of internalize the Islamophobia that exists.”

He continues, “When I came out [as Muslim] on social media, I started to then feel the feedback. I was getting remarks like ‘how can you support a religion which kills gay people’ all this stuff.”

Others told him he had converted to the most “horrific religion” in the world. Some went so far as to delete him from their Facebook friends list.

Related: Where queerness meets Islam: Resistance from the margins of the margins

But suggesting a person can’t be bother LGBTQ and Muslim does a “disservice” to people living at that intersection, Dalton says.

I think there’s an issue in the LGBTI community. We’ve got so used to the narrative of religion being wrong, that it’s oppressed people… we’re trapped in that narrative now,.

Just say we’ve got a young Pakistani lad who’s been raised a Muslim that comes out at the age of 18, where does he go? Does he go back to his own Pakistani community and face the cultural beliefs that it’s wrong?

Or does he go to the gay community who tells him “you can’t be Muslim because it’s a religion that oppresses us”.

But Dalton says it’s possible to be queer and Muslim. And anyone who suggests otherwise is speaking from a place of ignorance.

“You can be both and you can be very proud to be both,” he argues.

Dalton is now calling on others in the LGBTQ community to stop isolating their Muslim counterparts and instead be allies for them.

“We’re a minority within a minority,” he says. “We really need people who aren’t a Muslim to defend us.”