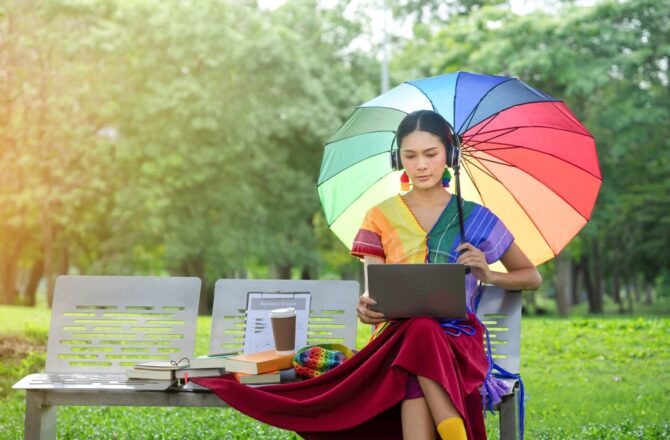 What’s on your gay agenda today? You must have one—the Christian Right says we all do!

After putting up with this popular phrase for 30-some-odd years, Twitter certainly has some thoughts about the gay agenda, as you’ll see below.

Anti-LGBT groups like the Family Research Council and Springs of Life Ministries popularized the idea that there’s a “gay agenda” in the 1990s, as Didi Herman wrote in The Antigay Agenda: Orthodox Vision and the Christian Right. Springs of Life even produced a video series on the topic, which was “intended to be an exposé of the lesbian and gay movement’s secret plans for America,” Herman added.

Related: Someone tell this conservative there’s no such thing as “Big Gay”

As the Los Angeles Times reported in 1993, Springs of Life officials claimed at the time that they had shipped out more than 25,000 copies of its videotape “The Gay Agenda” across the nation. Members of Congress got copies, and Gen. Carl Mundy, then the commandant of the Marine Corps, gave copies to other Joint Chiefs of Staff, per the Times.

Soon the phrase had become part of the cultural lexicon, especially among conservatives. The late U.S. Supreme Court Justice Antonin Scalia even cited it in his 2003 dissenting opinion in Lawrence v. Texas: “Today’s opinion is the product of a Court … that has largely signed on to the so-called homosexual agenda, by which I mean the agenda promoted by some homosexual activists directed at eliminating the moral opprobrium that has traditionally attached to homosexual conduct.”

Yes, we would like any moral opprobrium eliminated! In fact, as ESPN’s LZ Granderson explained in a 2014 TED Talk, the “gay agenda” is just the U.S Constitution. In other words, it’s us just wanting to be treated like full citizens. “There it is: the gay agenda,” Granderson said. “Run for your heterosexual lives.”

Here are other people’s thoughts on that agenda of ours…

The gay agenda is complete?? https://t.co/Xh5leZ1mK6

walked past 3 girls in town who were mid convo and used the term “dirty hetero” , the gay agenda is working !

why call it "the gay agenda" when "the homoschedule" was right there?

You've heard of the gay agenda, now get ready for the bitinerary

You’ve heard of the gay agenda now get ready for:

After watching Queer Eye, I'd just like to say that the gay agenda is very different from what I'd been led to believe.

Mostly it involves cleaner living spaces, skin care, and tucking the front of your shirt in.

The only thing on "The Gay Agenda" is brunch.

The pioneers of the gay agenda pic.twitter.com/YyVZHBsaW5

FYI: The gay agenda has always been "enjoy every moment you can before a hateful person takes it away."