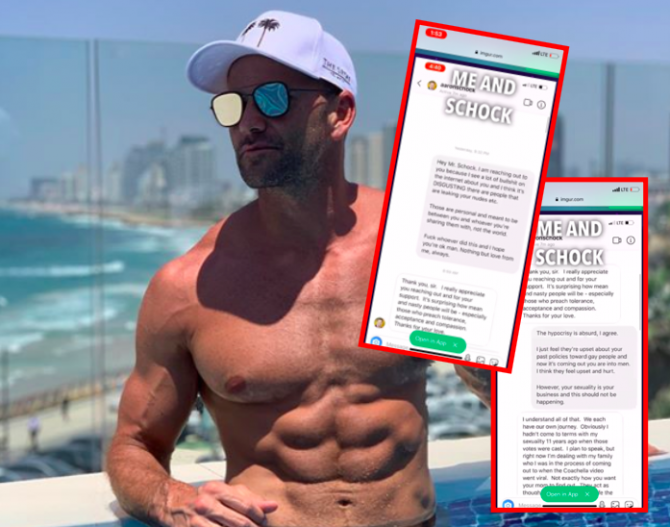 Screenshots of an alleged private chat between Aaron Schock and a man by the name of Edwin Montanez have surfaced online and they offer new insight into the disgraced ex-lawmaker’s recent string of scandals.

Again, just to be clear, these are screenshots from an alleged private chat. Their validity has not been verified, though they appear to be legit.

It’s also not totally clear who leaked the screenshots, but given that they’re watermarked with the words “ME AND SCHOCK,” it seems Montanez himself may be the source.

In the chat, Montanez begins by reaching out to Schock to say how “DISGUSTED” he is by everything that’s been reported about him, including his nudes that leaked earlier this summer.

“Those are personal and meant to be between you and whoever you’re sharing them with, not the world,” Montanez writes.

Schock responds by thanking him for his support before spewing off something about liberals who preach about tolerance, acceptance, and compassion only to act “mean and nasty” towards anyone who doesn’t agree with them.

When Montanez brings up Schock’s antigay record from his time in the U.S. House of Representatives, Shock replies: “We each have our own journey. Obviously I hadn’t come to terms with my sexuality 11 years ago when those votes were cast.”

He goes on to say that he “plans to speak” about it eventually, but “right now I’m dealing with my family who I was in the process of coming out to when the Coachella video went viral. Not exactly how you want your mom to find out.”

Related: WATCH: Video emerges of Aaron Schock hooking up with a guy at Coachella

Schock continues by saying that people “act as though I’ve been living a gay life the past ten years” when in truth he “only started coming out out a year ago.”

“I don’t know any gay man who’s told the whole world at once. The lack of perspective I believe is due to their hatred for me being a Republican. Anyways, I appreciate your understanding. Truly.”

Montanez then says that, coming from a conservative family himself, he totally understands Schock’s struggle.

“It’s very hard to come to accept who you are and realize you’re not wrong for bad for it,” he writes. “Please be yourself and never feel bad or ashamed for that!”

Related: Twitter has a lot to say about that video of Aaron Schock stuffing dollars into a go-go boy’s briefs

He immediately follows that message with a post script that reads: “This may be inappropriate but you have a very edible ass. Just needed to say that. I’m very impressed.”

To which Schock answers by saying he doesn’t hang out in West Hollywood, despite online reports to the contrary, because “Santa Monica Blvd is not my jam.” Then he thanks him for the compliment about his ass.

He then asks Schock if they can be “buds” before offering to send him screenshots of all the terrible articles that have been written about him online.

“I’m sure none of them have met me,” Schock replies. “But all claim to know so much.”