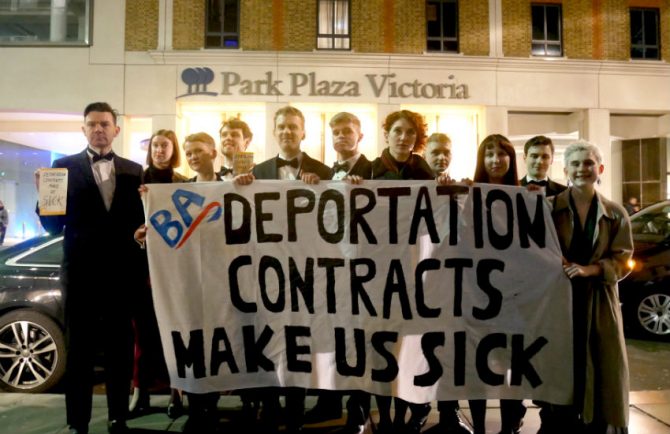 Visitors to a London gala on January 30 found themselves the target of LGBTQ demonstrators protesting the deportation of refugees by British Airways.

Top level government executives like aviation minister Liz Sugg joined airline CEOs like British Airways boss Alex Cruz for dinner and speeches at the Park Plaza Hotel regarding the state of the travel industry at an event hosted by Airlines UK, a trade body for airlines operating in the United Kingdom. In the midst of it all, a group calling itself “Lesbians and Gays Support the Migrants” infiltrated the gala in rented tuxedos and cocktail dresses. About 14 of them made it into the banquet hall, where four stormed the stage, disrupting the evening.

The four on stage held up a sign reading “Deportation Contracts Make Us Sick,” a reference to a government contract granted to British Airways to deport migrant refugees on their commercial flights. Several other protestors handed out airsick bags with the slogan scrawled on it to diners. Security then began removing the protestors one by one. 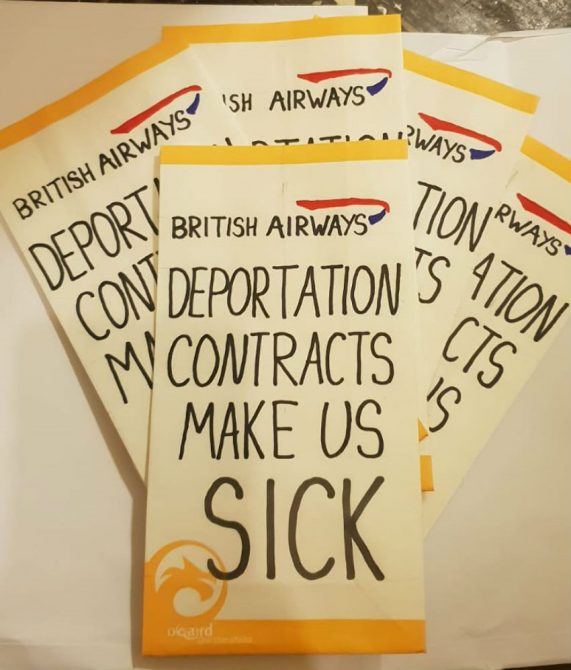 Following the protest, Sam Bjorn, a spokesperson for LGSMigrants released a statement regarding the actions of the group:

“Deportations endanger the lives and safety of migrants. While the airline industry elite enjoy a luxury three-course meal, thousands of migrants are stranded in countries where they have little to no connections and are vulnerable to severe harm and potential death. We call on BA and other commercial airlines to end their deportation contracts with the Home Office and take a stand against the Government’s racist hostile environment.”

Related: Everyone Who Works For British Airways Is A Closet Bisexual

The aforementioned Home Office, the British ministry responsible for visas and immigration, countered with a statement of its own:

Official UK policy does allow for contracts with commercial airlines to buy seats on regular and charter flights to return illegal immigrants to the country of their origin.

A spokesman for Airlines UK had no comment on the matter.