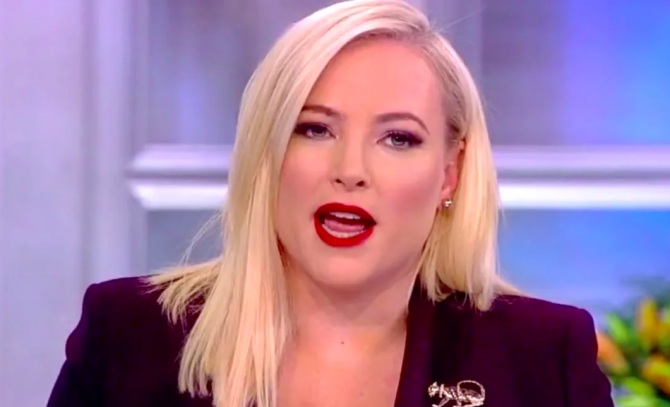 A new CNN poll released over the weekend found Pete Buttigieg, the first openly gay man ever to run for President of the United States, leading the field in Iowa. And nobody is less impressed by this than The View co-host Meghan McCain.

When Joy Behar said she thought Buttigieg had a real shot at winning the Democratic nomination in 2020, citing his service in Afghanistan, his moderate policies, his traditional values, and the fact that he would be a historic candidate, McCain, who is John McCain’s daughter (in case anyone forgot), wasn’t having any of it.

“I’m not going to try to burst the bubble here,” the alleged LGBTQ ally griped. “But, here’s always a sparkly, shiny object in primary politics. I can remember when Herman Cain was polling really high, Newt Gingrich at one point. There’s always a bright, shiny candidate. Howard Dean, and then infamously yelled, whatever.”

Spoken like someone who truly supports the LGBTQ community and wants to see its members succeed!

If Buttigieg truly is just a “sparkly, shiny object” and nothing more, then he hasn’t lost any of his luster since announcing his candidacy back in April.

He has out-fundraised almost all of his opponents, bringing in tens of millions of dollars each quarter, while also seeing his poll numbers inch upward at a slow but steady pace.

In addition to now leading in Iowa, he has also broken into double digits in the last few New Hampshire polls, and he has seen his national polling averages improve.

From where we’re sitting, that’s looks like someone who is on a trajectory. Not a ” bright, shiny” meteoroid on the descent.

McCain’s point about Black voters, however, is valid. Despite his best efforts, Buttigieg has struggled to connect with that demographic. Most recently, his husband, Chasten, who has been on the campaign trail with him since April, stopped by Tulane University in New Orleans, Louisiana, where he posted about “building a more inclusive future” with a roomful of 99% white people.

The good news for Buttigieg is that there’s still plenty of time to continue his outreach efforts and find ways of making all groups of voters feel included in his vision for the country, and given his overall success on the campaign trail thus far, we have no doubt about whether he can do this.

Related: Meghan McCain was just made an official Ru Girl and people are pissed