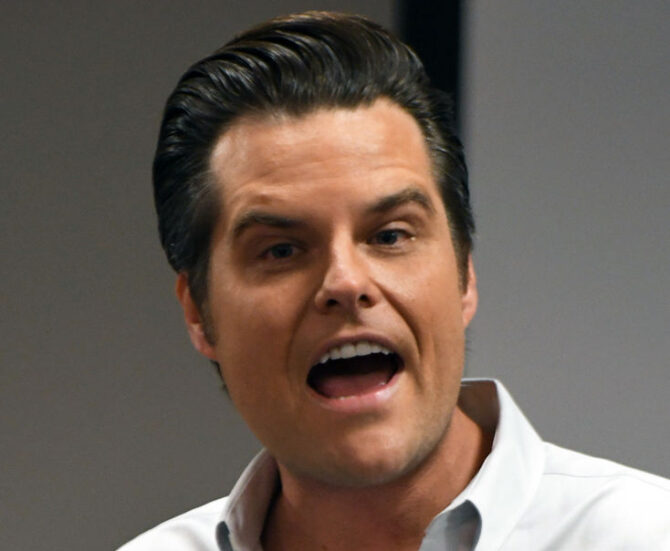 First, a federal judge has approved yet another sentencing delay for Matt’s former wingman, Joel Greenberg, so he can continue helping investigators who are looking into whether the anti-LGBTQ lawmaker paid to have sex with a high school student.

On top of that, the Daily Beast just published a new piece about how Gaetz was in “chaos mode” after his teen sex scandal first broke back in March 2021.

The article helps shed light on that unhinged interview he gave to Fox News’ resident homophobe Tucker Carlson, which resulted in him being blacklisted from the conservative propaganda network.

Fifteen minutes before Rep. Matt Gaetz (R-FL) was due to go on Tucker Carlson’s Fox News show on March 30, 2021—hours after a bombshell report that he was under investigation for allegedly sex trafficking a minor—Gaetz was shouting, repeatedly, at FBI agents in his family home.

“Do you have a warrant to be here?” Gaetz yelled, according to an FBI report of the event obtained by The Daily Beast.

As it turns out, however, the agents didn’t knock on Gaetz’s door to discuss his alleged bad behavior. They were there to talk to him about someone who was trying to extort his elderly father by promising to make his son’s teen sex scandal go away if he forked over $25 million.

But this didn’t stop the lawmaker from going on TV minutes later and telling Carlson, without evidence, that the was a “deep state” plot against him, along with a number of other insane claims about how the Biden White House and the Department of Justice were in on the whole thing.

“I believe we are in an era of our politics now, Tucker, where people are smeared to try to take them out of the conversation,” he said.

After the commercial break, Carlson came back on the air to call his exchange with Gaetz “one of the weirdest interviews I have ever conducted.” The Florida lawmaker has not appeared on Fox News since.

“That was one of the weirdest interviews I've ever conducted."pic.twitter.com/lo2BqvxHJT

The Daily Beast also reports that the FBI investigation into Gaetz’s alleged teen sex crimes has been going on for even longer than first reported:

Although the ongoing investigation has persisted with little action recently, the government records provide new insight as to when that investigation started.

According to previous news reports, the DOJ, led by Trump-appointed Attorney General Bill Barr, launched its investigation in the “final months of the Trump administration.” But the FBI documents more narrowly ascribe the start of the investigation to the “summer of 2020.”

Gaetz, who is currently running for reelection, continues to deny any wrongdoing.

Related: Another very creepy tweet from Matt Gaetz has everyone hiding their daughters