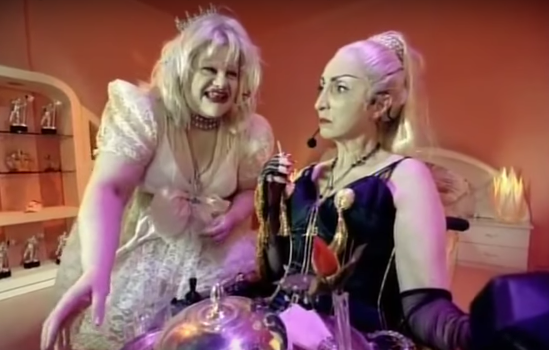 Rolling Stone has unearthed a 20-year-old short film by David LaChapelle that is shockingly relevant to today. It’s a Whatever Happened to Baby Jane? parody reimagined with Courtney Love and Madonna impersonators.

The grotesque film was shot back in 1996, when both women were at peak points in their careers. Courtney was rock-and-roll’s “it” girl and a raging mess, and Madonna was right on the cusp of clinching icon status and wasn’t about to let anyone get in her way. The two couldn’t have been more different, or more similar.

Related: Bette Davis who? Jessica Lange’s real-life feud is all too real.

They had a famous run-in during the 1995 MTV Video Music Awards when Courtney crashed Madonna’s interview with Kurt Loder by throwing makeup at her then barging onto the stage uninvited. After that, they became archenemies.

David LaChapelle took their relationship and ran with it in his modern take on the 1962 camp classic for for MTV’s Raw. In it, two actresses play Madonna and Courtney playing Joan Crawford and Bette Davis playing Blanche Hudson and Baby Jane Hudson.

Related: Everything You’ve Always Wanted To Know About “Whatever Happened To Baby Jane?”

It opens with Madonna chain-smoking and lifting weights in a wheelchair while watching her old music videos. “Still a pretty good video,” she mutters. Moments later, Courtney, dressed in a filthy babydoll dress, comes barging in and flips over the TV set. “You’ve been watching that video for 30 years,” she screams before serving her nemesis a live rat. “Maybe you oughta reinvent yourself!”