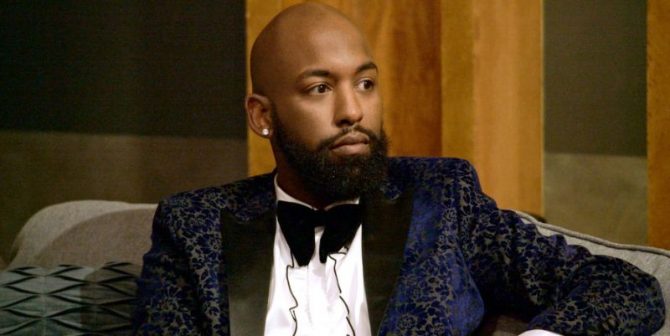 Carlton Morton currently stars in Season 1 of Netflix’s new dating reality series Love Is Blind. But things have not been easy for him these past couple of weeks. In fact, they seem to be getting worse.

After coming out as “a bisexual or fluid male,” Morton’s girlfriend, Diamond Jack, blew up at him and returned her engagement ring on camera. Things got pretty heated after that.

Speaking to CNN afterwards, Morton said he regretted coming out to Jack, as well as how he responded to her anger about his sexuality.

“I told her on a platform that has 190 million subscribers globally,” he reflected. “I regret the way that I responded to [her response].”

Morton added, “I do feel like the true story there about bisexual men is being overlooked, because people are so angry.”

Since then, he’s been met with a constant wave of biphobic remarks on social media and insensitive questions from interviewers.

Basically Carlton Morton from #LoveIsBlind was WRONG! He should have disclosed all that BEFORE the proposal.

Love Is Blind on Netflix is a massive trashy mess. Genuinely awful. Carlton Morton is the bitchiest loser man I ever did see. Played the victim hard. Jessica Batten is absolutely MENTAL.

In a recent radio interview, Morton was asked to “make a choice” between men or women.

“You understand how incorrect that is and how offensive that is to bisexual people?” he replied. “You are basically wiping them out by saying they have to make a choice.”

Now, it appears he’s had enough.

In an Instagram post shared yesterday, Morton says he’s “done” with people attacking him for being a queer Black man, writing:

“I’m really done. Thanks for the press requests, bookings, etc. I am not doing any press/bookings as of today’s radio interview. URBAN MEDIA has been the WORST to me. Black lives matter until it’s an LGBT Black life. Also, so called “celebrity” friends on social media have every opportunity to defend my CHARACTER yet they don’t! I’ve argued for tons of people. Y’all see ANY of those people speaking up for me? I”M DONE.”

Thanks for the 3 of y’all who supported me in this. I feel alone and don’t want any of this life anymore. I’m fighting ALONE. And it HURTS.

He followed that up with a cryptic tweet that said: “Today is one of those days where I don’t want to be here. I feel extremely alone and unsupported. I’ve cried for help since Feb. 13. No one cares.”

Today is one of those days where I don’t want to be here. I feel extremely alone and unsupported. I’ve cried for help since Feb. 13. No one cares.

The remarks have many people feeling worried:

#LoveIsBlind star #CarltonMorton shared some very troubling posts on his Instagram page a few moments ago.

Hopefully he receives the support he needs amidst the criticism he’s gotten from his conduct on #LoveIsBlindNetflix ???? pic.twitter.com/1w0476ZNbg

Love Is Blind premiered on Netflix on February 13 and is currently available to stream.

Related: Bisexual reality star claps back at interviewers who ask him to “make a choice” between men or women