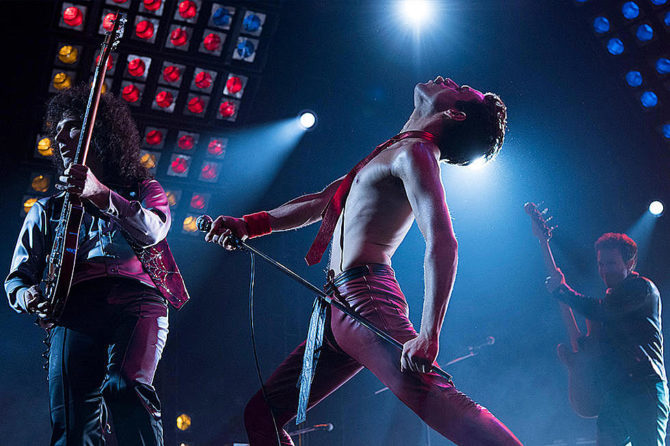 Something strange happened to the late Freddie Mercury on the way to the big screen. First, the Zanzibar-born Brit of Persian descent started to look a lot like Mr. Robot’s Emmy-winning Egyptian-American star Rami Malek wearing a fake overbite. Second, his lifelong hang-ups became sex, drugs, rock ‘n’ roll, and … a girl.

If we are to believe Bohemian Rhapsody, which is up for five Oscars at the February 24 Academy Awards, the bisexual rock legend spent most of his adult life pining for his girlfriend-turned-ex Mary Austin, even years after their split. According to the film, there must have been something extra about Mary. Throughout his numerous dalliances with men (mostly offscreen) and his final relationship, with Jim Hutton, movie Mercury secretly longs for a white-picket-fence life with her.

If you tilt your head to a certain angle, Rhapsody’s narrative has much in common with its fellow Best Picture Oscar nominee A Star Is Born, only Mercury assumes both the Bradley Cooper and Lady Gaga roles: dead man walking (and singing) and supernova in flight. (Incidentally, the artist formerly known as Stefani Germanotta got her stage name from the 1984 Queen song “Radio Ga Ga,” which is included in the Live Aid sequence that ends Rhapsody.)

Despite its award-season clout, some have excoriated the film for its depiction of Mercury’s love life. Professional critics and social media’s armchair ones accuse it of whitewashing his sexuality in favor of something more palatable (i.e., straight) for the masses that have made it the highest-grossing musical biopic of all-time ($212 million in North America and still counting).

In a year in which LGBTQ characters can claim unprecedented representation among the Best Picture Oscar nominees (The Favourite, Green Book, Can You Ever Forgive Me?, and Vice all feature pivotal LGBTQ roles), Rhapsody’s heterocentric storytelling is particularly disappointing.

It’s like watching a movie about Aretha Franklin that glosses over the making of “Respect.” Sex and gay culture informed so much of who Mercury was onstage, but the movie seems to want us to believe they were mostly fodder for his performance art. Malek’s Mercury comes across as curiously asexual.

To be honest, I was personally less vexed by Rhapsody’s straight bias than I was by its crooked timeline. What was Queen doing performing “Fat Bottomed Girls,” a song that wasn’t released until 1978, in the mid-’70s? And could Queen possibly have written “We Will Rock You,” an anthem that charted in 1977, after they went to number one in the U.S. with “Another One Bites the Dust” in 1980?

By the time Live Aid was turned into an AIDS confessional, I’d already thrown up my hands and surrendered. Did Mercury’s doctors initially diagnose him with AIDS, as the film implies when he tells his Queen bandmates backstage, “I’ve got it,” meaning AIDS, not HIV? The two are not synonymous, which feels like a straight movie’s oversight. Any self-respecting LGBTQ film should understand that an HIV diagnosis typically precedes the onset of AIDS. But then, the only truly authentically gayish things in Rhapsody are the Queen tracks to which Malek lip-syncs and the sequence that recreates the making of the band’s “I Want to Break Free” video.

Perhaps a more well-rounded rendering of Mercury’s personal life would have enthralled me to the point of overlooking the chronological shortcomings. Mercury’s lust for men sent Mary Austin packing, so it had to have been a far more dominant sexual orientation than presented in the movie, which is as tentative about gay sexuality as its version of Mercury is. We see him exchanging furtive glances with men, flirting with them, even pecking a few on the lips, but for someone with such an oversized persona, his sexual passion is strangely muted onscreen.

A Star Is Born, a quintessential straight romance, has more vivid LGBTQ flourishes, including the casting of gay icon Lady Gaga and setting the pivotal when-Jackson Maine-met-Ally scene in a drag club with queens swanning about fabulously. Meanwhile, its sexist, doomed take on heterosexual love is not exactly a ringing endorsement, no matter how intensely Gaga gazes into Cooper’s eyes as they melt their way through “Shallow.”

Roma, another Best Picture nominee, doesn’t have any openly gay characters, but it offers an equally bleak view of heterosexual relationships, with both of its Oscar nominated actresses playing women betrayed by the men in their lives. If only they’d met someone as devoted to them as Rhapsody’s Mercury is to Mary.

Even the movie’s offscreen narrative favors heterosexuality. Director Bryan Singer was fired before filming wrapped due to frequent absences from the set, and if we believe the hearsay, he had a contentious working relationship with his straight male lead.  Singer retained a directing credit, but his firing was strike one against him as a potential openly gay Best Director Oscar nominee.

Strike two: more notoriety and legal hassles for Singer due to new accusations of sexual assault against him by various men. The charges led to GLAAD’s rescinding of Bohemian Rhapsody‘s Outstanding Film nomination at this year’s Media Awards. Strike three.

Malek, meanwhile, gained a Golden Globe, a SAG award, a BAFTA, and a Best Actor Oscar nomination (alongside A Star Is Born’s Cooper and At Eternity Gate’s Willem Dafoe, he’s one of three category hopefuls who played tortured, doomed artists). He also snagged a real-life girlfriend in Lucy Boyton, the British actress who played the object of Mercury’s romantic obsession.

Freddie Mercury doesn’t get the girl in the end, and that, not his career misfires or being diagnosed with HIV, seems to be the great regret of his life in Rhapsody. Surely it won’t win Best Picture over Roma, The Favourite, and Green Book, but a more balanced view of Mercury’s private life probably wouldn’t have made it any less of a contender.