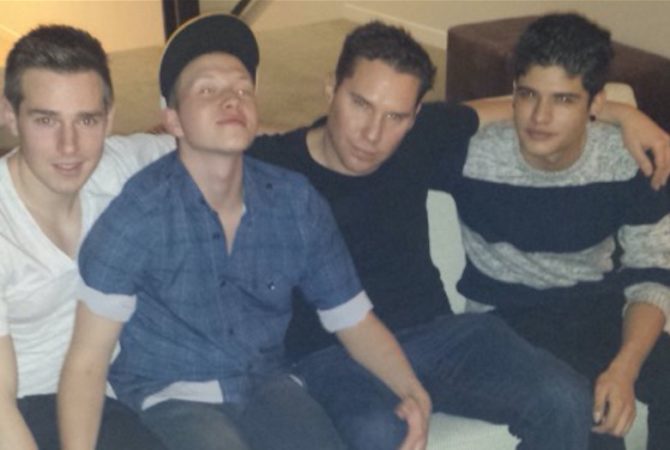 Bret Tyler Skopek was 18 when he moved form Arizona to Los Angeles to pursue a new life. The year was 2013, and shortly after arriving in the town of tinsel, he attended a Halloween party and met a priest. That priest was Bryan Singer.

If you’re thinking it’s a bit on-the-nose for a famed Hollywood director with a reputation for weilding power and sex over teenage boys to dress up as a Catholic priest, you are not alone.

But that’s just the beginning. In an interview with Deadline, Skopek provides something of a f-ed up highlights reel from his year-long relationship with Singer.

Naturally it centers around an ever-dangling carrot of breaking into film and television acting. Skopek claims Singer fed him a pipe dream of a bit part in a X-Men movie, but the mythical audition never did materialze.

He also says he got a front-row seat to the revolving door of young men in Singer’s orbit.

“I’ve seen wannabe YouTubers come. I’ve seen actors. I’ve seen singers. I’ve seen people like me that don’t know what they want to do,” Skopek told Deadline. “You come (to LA) with dreams of being whatever. You’re still going to be caught up into this mess.”

Eventually he realized he was caught up in a fantasy. “I just, I wasn’t happy with myself,” said Skopek, who’s now 22, said. “I couldn’t go on anymore.”

Singer, who is currently being sued by another young man who alleges Bryan raped hin on a yacht in 2003, again denied all allegations lobbed against him:

“If Mr. Skopek had a problem with Bryan, he never mentioned it before today,” a spokesperson for Singer told Deadline. “He is someone who has repeatedly asked Bryan for money over the years, and did so as recently as last month,” they added. “He also is the one who asked Bryan for a role in Apocalypse, which Bryan declined to offer to him. The timing of Mr. Skopek coming forward now with these allegations is questionable.”

Here he describes the first time he and Singer had sex:

“We’re in the basement, me and the other two kids, we’re kind of chilling. Bryan takes us up, one by one, and gives us all a Molly. He’s splitting it with us. ‘I’ll do half if you do half.’ In the meantime, [an associat of Singer] has another [young man] come over. He’s very dirty. He’s off the streets.”

Then there was the time Skopek was with Singer on the set of the CBS show Battle Creek:

“I was looking over my shoulder while [Singer] was texting another person, ‘Hey, I have little Bret here. I want you to come over and do him.’ ”

And this cheery memory of being around Singer during the Michael Egan case:

“So many times, I’d come over and Bryan would cry himself to sleep, ‘I’m so depressed. I’m spending so much money on lawyers for the Michael Egan case.’ ”

Skopek also shares a particularly horrific story about another disgraced Hollywood player, former APA agent Tyler Grahsam. Grasham expressed interest in representing Skopek in 2016, who had recently completed a novel, and flew him out to LA.

The two men returned to Grasham’s place, Skopek said, where Skopek locked himself in the bathroom for two hours, feeling violently ill. When the young man emerged from the locked room and passed out on the agent’s bed, he claimed the agent sexually assaulted him, despite Skopek’s efforts to fight him off.

“In the morning [Grasham] asks why there’s blood on the sheets. He said, ‘I guess I fingered you too hard. I’m sorry I was drunk.’ I was bleeding for a week,” Skopek recalled, adding. “It makes me realize these people don’t know what they’re doing sometimes. They are out to enjoy themselves. If they hurt someone in the process, they don’t even remember.”