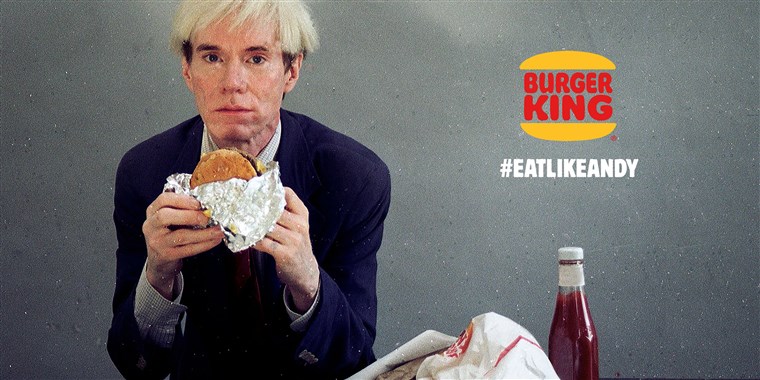 Queer references during the Super Bowl the last few years have been dropping like Adam Levine’s shirt during the halftime show.

Once upon a time, several commercials each year noted we are here, for better and for worse, with same-sex dads (Coca-Cola), a car running down Richard Simmons (Bridgestone), or a Queer Eye guy joining Cindy Crawford ogling a handsome man walking down the street (Pepsi).

Those generally welcome references have been dwindling over time. Super Bowl LIII had just one ad reference. And it was one that left heads scratching: Andy Warhol quietly and carefully opening a Burger King bag and pouring ketchup on the side of the Whopper.

Related: These two male cheerleaders will make history when they perform at Super Bowl

The pop artist has trouble with the Heinz ketchup bottle, quietly commenting, “It doesn’t come out.” (Heinz is coincidentally based in his hometown of Pittsburgh, home to the foundation in his name. The comment by the former ad man may be a reference to a well-known 1970s Heinz “Anticipation” campaign and the song lyrics, “It’s making me wait.”)

How did Burger King bring Warhol back to life? The ad was actually footage of Warhol from a 1982 movie “66 Scenes from America” by director Jorgen Leth. The company obtained the rights to the scene from Warhol’s foundation and the director’s son, according to Advertising Age.

The idea was likely to associate the Whopper, which has become an iconic brand in its own right, with the fashion-forward queer pop art icon.

In 2017, the company created an unusually powerful bullying ad, serving up “bullied” Whopper Jr. burgers to real customers who largely ignored a teenager bullied in the restaurant (played by actors). The ad sharply noted that 95 percent of customers reported their busted-up burger but only 12 percent stood up for the bullied high school junior.

And in 2015, Burger King debuted the Proud Whopper in San Francisco, wrapped in rainbow wax paper: “We are all the same inside.”

Burger King is known for pulling campaign stunts, where the advertising itself is just part of the fun. Some stores currently have menus trolling McDonald’s with items called, “Like a Big Mac, but Actually Big” and the “Burger Big Mac Wished It Was.”

Last year, it ran a commercial that cleverly tricked consumers’ Google Home smart speaker devices by stating, “O.K. Google, what is the Whopper burger?” to actually look up Whopper burgers on Wikipedia. Google wasn’t participating in the campaign and quickly disabled the speakers’ response.

There was also Whopper Detour campaign used geolocation in the BK App to steer customers away from all McDonald’s by allowing smartphone users to order a Whopper for a penny, then find the nearest Burger King to pick it up.

Michael Wilke, who has covered advertising since 1992, is the founder of Commercial Closet/AdRespect.org, and Senior US Consultant for marketing and diversity firm Out Now.