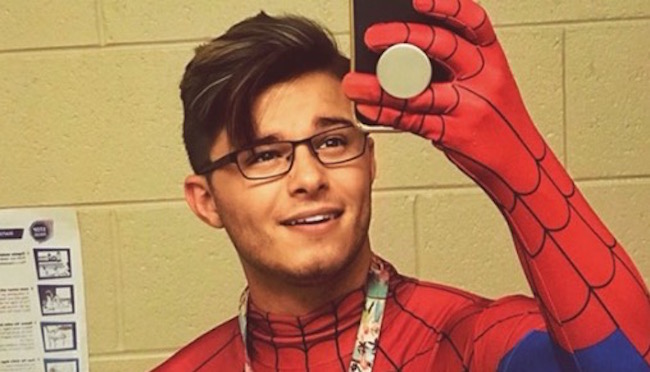 Just when you thought you weren’t a fan of superhero sagas.

A very good-looking (and openly gay) teacher decided to wear a Spider-Man costume to school this Halloween — and now the Internet is in overdrive after he shared photographic evidence on Twitter. (For all of you who fear for the children, don’t fret; he wore a pair of sweatpants over the costume so as not to destroy civilization forever.

The 26-year-old Indiana teacher is gaga for Halloween as a general rule, and in the past, he’s dressed up as Batman’s Robin and Peter Pan. This year he went as Spider-Man at his students’ special request… and they chose very wisely, indeed:

“My students get to vote on the costume,” he tells Gay Star News. “And then I wear it to our Halloween party in class. They picked Spider-Man this year.”

Williams is openly gay, even at school. “‘They’re young so they don’t really understand different marriage dynamics,” he says. “I just say, ‘In my family, there are two Dads.’ It’s about normalizing it. I want my students to know all families are built differently. It helps build tolerance and understanding.”

who wore it better?

Yes, the Internet be buggin: