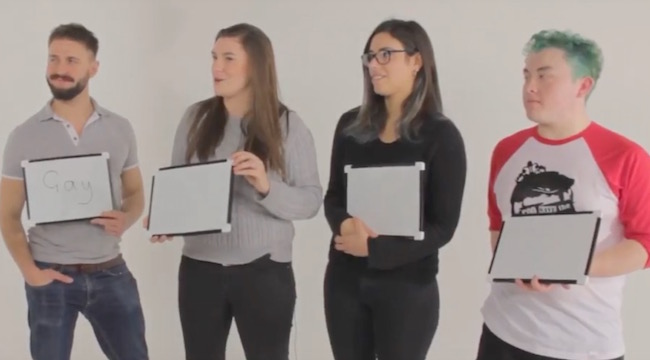 Is it the way they touch and twist their hair? Or how they nervously bite their upper lip as they turn to ask the time? Their misguided love of Supertramp? Those absolutely hideous stripey tights?

Is there anything that might tip off some super-nosy straphanger as to whether or not that stranger sitting across the train is bisexual?

Gearing up for their yearly celebration from February 9 to February 11, The National Student Pride put together a video to help shed light on issues often faced by bisexual people — particularly misconceptions by their peers and limited representation in media and culture as a whole.

Their strategy: Round up four complete strangers, and then grab four other strangers and ask them to suss out everybody’s sexuality based on their taste in music, their clothing, and even the intensity of their hugs.

The National Student Pride will also present a “Bisexual+” panel on Saturday hosted by bi activst Lewis Oakley, who says bisexual people need “spaces to meet one another, bi inclusive media output, and even official representatives who look after the needs of bisexuals”.

Now… time to hazard that guess.