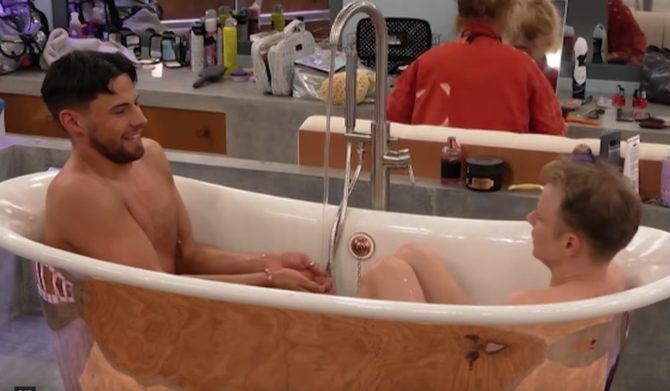 A key component of the Big Brother branded experience seems to be the homoeroticism of gay/straight male housemates. (Where could they have gotten this idea?)

And if you thought this season of Celebrity Big Brother UK, which promised to be about–and celebrate–women, would be any different, well, think again!

Related: Big Brothers’ male contestants can’t stop making out with each other

Because a totally-organic-and-not-remotely-performative bromance had officially budded between Courtney Act and Andrew Brady.

And rather than bouncing along for weeks with casual flirtation and the occasional drunken cuddle, this pair has fast-tracked their…whatever it is they share…directly to “shave each other’s legs in the bath” intimacy.

Yeah, there’s even a “drop the soap” rape joke, because, tee-hee.

Producers/instigators later asked Brady whether he was flirting with Act: “Yeah I think so because Courtney’s only ever out when we’ve had a few drinks, Courntey looks even better.”

Related: Three muscly “Big Brother” guys soap each other up in the shower, just because

“I’m not taking anything away from Shane, he’s a good looking lad, but when you’ve had a couple of drinks, you see Courtney and you’re like ‘Wow.'”

“Big Brother, you need to stop giving me alcohol when I’m around Courtney, because you never know!”