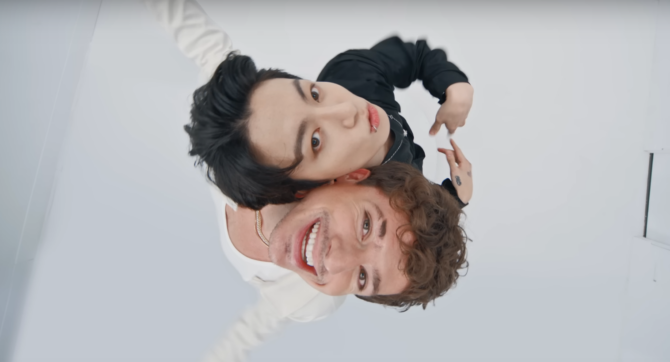 Does it still count as queerbait if they’re hot? Who’s to say!

Charlie Puth’s new music video for his single “Left and Right” with BTS member Jungkook left some fans speculating whether the two were meant to look as entangled as they were, and it seems like Charlie is confirming that all the rumors are true.

Over the weekend, the “Light Switch” singer re-posted a comment on the video to his Insta story that said the pair was being portrayed as “occupying each other’s mind.”

charlie reposted someone’s youtube comment where they assumed that the ‘left and right’ mv was about two guys occupying each other’s minds,, pretty obvious but still !! pic.twitter.com/NiPTVP4gn9

Charlie has been a big fan of BTS for years, even performing with them at the MGA Awards back in 2018, and his bromance with his new collaborator is well-documented.

In a radio interview just before the video was released, he made sure to emphasize that he thinks “Jungkook is a very attractive human.”

Mr. Puth has been called a queerbaiter on social media more than a few times (most often just for his huge propensity for thirst trapping), but this latest turn feels like just another fun bit of fan service.

Naturally,, there’s a distinct difference between queerbaiting and just being a little thotty on the ‘Gram:

Sorry, what were we talking about?

Related: 5 homoerotic music videos that were too hot for the censors to handle

The video features only Jungkook and Charlie (and his Freud-esque analyst) as they sing to one another “You take up every corner of my mind/Your love stays with me day and night.”

Even the titular sound of one “I can feel you over here” in the left ear followed by another in the right comes to be traded off by the pair in the final chorus, as if it were a call-and-response between two distant lovers.

With Charlie re-posting the comment commending their connection and calling for “normalizing” it, it seems the closeness between the two male stars was purposeful.

Check out the gay subtext-filled “Left and Right” video…