A recently-ordained preacher in Chicago is going viral after wearing drag to lead a Bible study class with kids.

The session took place December 13 at St Luke’s Lutheran Church on Logan Square. The pastor involved, Aaron Musser, was ordained in the summer, according to the Daily Mail.

St Luke’s promoted the event beforehand by posting to Facebook, “TOMORROW—Seminarian Aaron is our preacher, and he’s preaching in drag! We invite you to wear garments/accessories that make you feel 100%, like the best version of yourself.

Musser himself added: “The sixth Sunday of advent is rejoice Sunday. It’s a chance for us to rehearse what a life of joy could look like. It’s a dress rehearsal. Preaching in drag is a theological reflection on joy: Joy overflows so abundantly, it can’t help but make itself known. Weaving together the day’s theme, queer theory, and lectionary texts, we will ‘dress rehearse’ for joy.”

The sermon was shared via Zoom for those who could not make it to the actual church. During it, Musser appears to read from a children’s book called Joy, by Corrinne Averiss. He also led the kids in prayer.

Afterward, St Luke’s shared images to its Facebook with some words from Musser.

“Today, we consider what it might be like to have a dress rehearsal for the kind of joy awaiting us on the other side of Advent. It’s been so hard to know what that joy will be, because it’s been so long since some of us have been joyful. It’s been a difficult and tiring couple of years.

“And I decided instead of telling you, ‘this is how I want you to be joyful,’ as we prepare for this dress rehearsal, I figured I would instead put on a dress as so many who have inspired me have done. I decided to follow their example, showing that liberation from oppressive laws clears a path for joy.

“But allowing yourself to feel joy can be scary. I wasn’t sure how the outside world would handle me when they saw me this morning. Joy is difficult to feel, it’s vulnerable. But isn’t it so beautiful?” 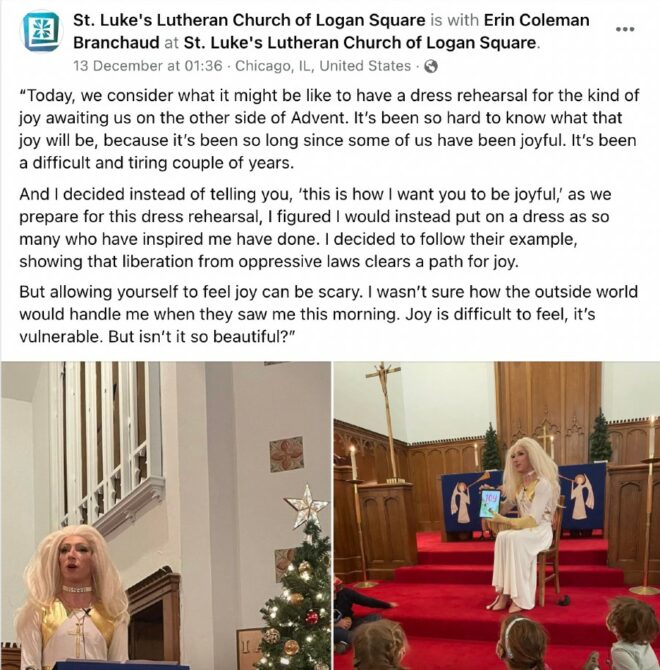 Many of the comments on the church’s Facebook page praised Musser for his message.

“What an amazing embodiment of Joy and beautiful reflection of the joy that awaits us,” said one. Another agreed, saying, “Divine joy is honest, authentic, and liberating. This is beautiful!”

However, in the last couple of days, several right-wing outlets have begun to pick up on the service, prompting a flurry of online criticism. St Luke’s Lutheran Church has now closed the comments section beneath the photos.

Drag queen story hours have become common occurrences in libraries in more liberal states, although they still provoke some criticism and blowback. Recently, Pastor Craig Duke, of the Newburgh United Methodist Church in Evansville, Indiana, was relieved of his duties after he took part in the HBO series, We’re Here, wearing drag.

St Luke’s of Logan Square is part of the Evangelical Lutheran Church in America, considered one of the more liberal denominations within the Lutheran faith.