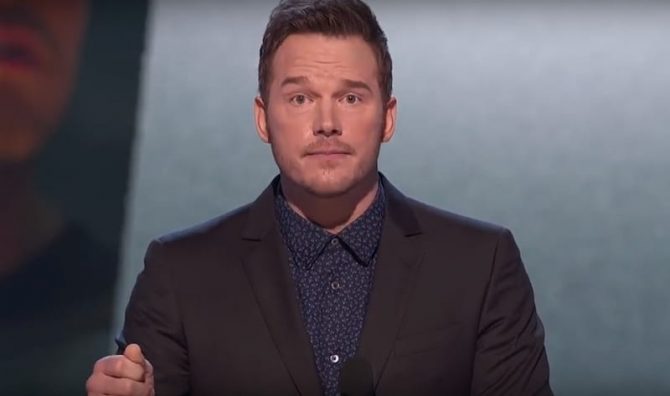 It’s been a rough week for Chris Pratt.

During a recent interview with Stephen Colbert, the Passengers star boasted about being a member of the vehemently antigay Hillsong Church. His remarks caused quite a stir in the media, and prompted actress Ellen Page to call out Pratt not once but twice on Twitter for affiliating with what many consider to be a hate group.

Related: Ellen Page isn’t finished yet, slams Chris Pratt over antigay church in yet another tweet

It took almost a week, but Pratt finally responded to the scandal yesterday. In a post to his Instagram story, he flat out denied his church is homophobic and insisted he’s never witnessed any discrimination happen there.

“I go to a church that opens their doors to absolutely everyone,” he wrote. “Despite what the Bible says about divorce my church community was there for me every step of the way, never judging, just gracefully accompanying me on my walk.”

“They helped me tremendously offering love and support. It is what I have seen them do for others on countless occasions regardless of sexual orientation, race or gender.”

Unfortunately for Pratt, his defense of the church wasn’t received well on Twitter…

The fact that Chris Pratt's church refers to being gay as a "lifestyle" should be your red flag.Thats christianese for "being gay isn't real, this is just a phase, and we plan to pray it out of you so come on in and let us gaslight you until you hate yourself enough to give us $"

less coverage of chris pratt and more coverage of the woman who escaped his religious psychoticness… Anna Faris ??

Who's gonna tell Chris Pratt Jesus said more about divorce than being gay?

Chris Pratt trying to get through to the gays. pic.twitter.com/rCA5CFOoaQ

I just Chris Pratt's response to Ellen Page and BOY its ugly. He constantly says his church is "no judgement." That implies that being gay is something wrong that they overlook. I've heard it before, along with "hate the sin love the sinner" I AM THE SIN. The sin is my existence.

ellen page: hey chris, you go to this church that is known for not being accepting of the lgbt community so maybe address that
chris pratt: b-but 🙁 this church was understanding when i, a straight man, divorced my straight wife 🙁 why are u attacking me 🙁

chris pratt: my church isn’t racist or homophobic because it accepted me, a PoD (Person of Divorce).

“chris pratt is not his church!”

anything to defend your white male fav, huh? his church does conversion therapy. if he’s a part of this church, he supports it. it’s that simple. and if he didn’t know anything about it, he’s just ignorant af and should leave. but did he? nope. pic.twitter.com/hqcwmlkmBy

In addition to its fierce opposition to all things LGBTQ, Hillsong Church founder Brian Houston is currently under investigation for covering up sexual crimes committed by his father, Frank Houston.

Not only that, but the church has also come under fire for misappropriation of funds, abusive church leadership, and connections to fraudulent faith healer Michael Guglielmucci.