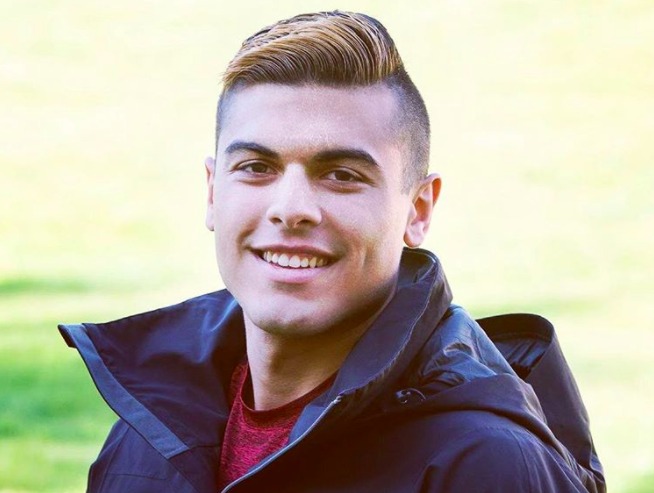 “As an alpine ski racer at Rocky Mountain College in Billings, Montana, I am very comfortable being gay,” 23-year-old Moya says. “Even in high school, being a gay skier was never an issue.”

“But it was my own internalized fears that nearly caused me to give up another passion of mine,” he continues. “Sports photography.”

Skiing, Moya explains, is a relatively solitary sport. It’s just him and the slops. But sports photography requires interacting with lots of other people and putting himself in situations where they might be people who aren’t OK with his sexuality.

“I was especially afraid of the football players,” he says. “They were the most built young guys I had ever seen and they could easily beat me up if they wanted to. I was a pretty small guy.”

There is the image that society creates about football players being the alpha males of high school and I bought into that image. They’re the guys you don’t want to mess with. You don’t want to talk to their girlfriends, and you don’t look them in the eye. You don’t talk to them unless they talk to you first. I never really communicated with them.

His biggest fear was that the players would learn he was gay and think he was “stalking them” or “being creepy.”

Eventually that fear, which Moya admits now was completely irrational, drove him to quit sports photography. He announced on Facebook that he would no longer be taking pictures at sporting events.

A short while after that, he posted another Facebook message. This time, he decided to come out publicly, which was something he had never really done. Almost immediately, he received an outpouring of support.

Five or six football players commented on it or messaged me directly saying that they were fully supportive, and that I had nothing to be afraid of. One even said, speaking for the whole football team, that they appreciated my photos, and, although it can be hard, it doesn’t matter what other people think as long as I am happy. He personally admired my coming out.

The whole thing made him realize that his fears had been totally unwarranted and based on stereotypes he held about athletes.

“Having preconceptions about others is not fair,” Moya writes. “It’s hypocritical to be afraid to be who you are around people because you assume they are going to disrespect you, bully you, or think the worst of you.”

“Don’t generalize about a group of people based on popular belief or media.”

Today, Moya is back taking pictures. He shoots all his college’s football, basketball, volleyball, and soccer games, and he’s made a lot of great friends along the way.

Before the mosquitoes got me

Four years later. My body is better than yours ??

Wearing all black in the heat ? [email protected]_hibbs

Been a while since I've felt good after a workout ??

"Masc looking for same" ?? Looking for a gym buddy