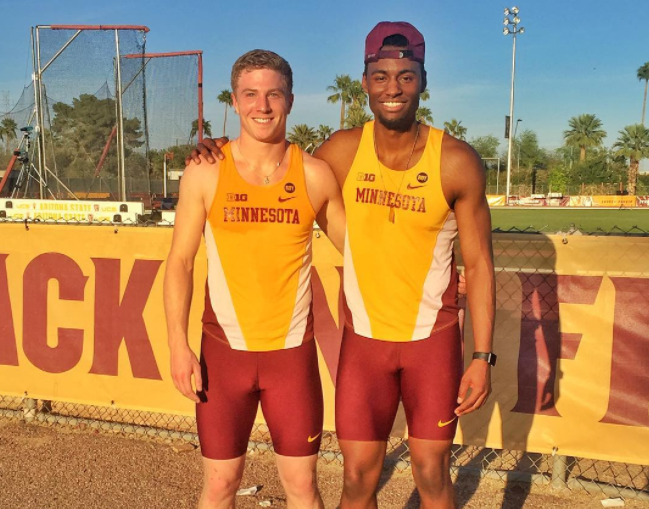 Brad Neumann and Justin Rabon both attend University of Minnesota. They both run on the school’s track team. They both love Beyoncé. They’re both gay. And they’re both in love… with each other!

Their love story began two years ago over Thanksgiving break. Both guys were struggling with their sexualities at the time, and neither one was out.

“One night I was texting [Brad] that I was going through some things,” Justin tells OutSports. “I sat on my bed having written a text that I was gay or bi and had the idea that I might like men. I stared at my phone, my finger hovering over the send button.”

What Justin didn’t know was that Brad was going through a similar struggle. Having grown up in a small rural town where being gay was something people laughed at, he had been keeping his sexuality a secret for his entire life.

Justin’s text came to him as a relief. “Finally, I had someone I could relate to,” Brad recalls.

From there a deeper friendship blossomed.

“At first we were just friends, talking freely and getting to know each other,” Brad recalls, “but I started to care more and more for this man every day. He made it possible for me to be happy again. He gave me a reason to smile.”

“We’ve been dating now for about two-and-a-half years,” Justin adds.

Not only that, but they’ve been keeping active Instragram accounts documenting their romance.

Check out some of the adorable pics…

There was a wild caterpie ?

My smile says I love you, and my eyes say ¡GET OUT! #JkHesAGoodOne ?

Congrats to one of my best bros, @jayyrayy_ , on his acceptance to transfer to Minnesota! We're gonna kill it next year ???? #BuckTheFadgers #GoGophers #Congrats

I wish exercising my right to vote was the only exercise I actually need. #ivoted #election2016

We took Justin rollerblading for the first time today. He only fell once!

Justin and I have poked each other 2,767 times on Facebook. If that's not love, I don't know what is. #JustinTurns22

Run fast this weekend at Big Ten's, wish I could be there! ? #runforbeyonce #gogophers ????

Related: This college tennis star wants to end bisexual confusion once and for all