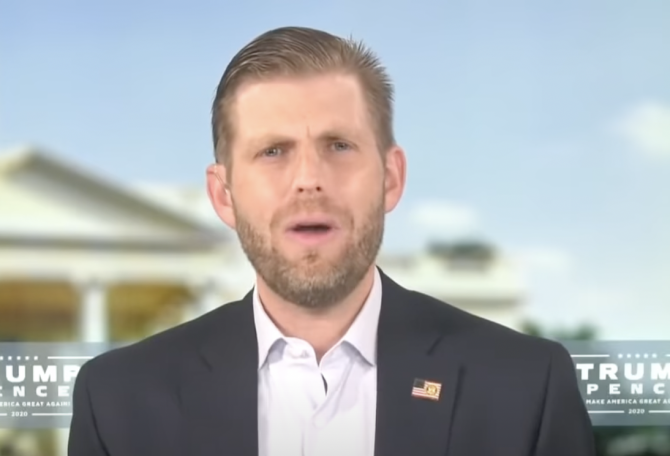 Eric Trump is down in the dumps.

After it was reported that his dad’s failing D.C. hotel is officially being sold and will soon be rebranded as a Waldorf Astoria, he wrote a short and pathetic email to the Miami Herald about the whole thing.

In the missive, Eric, who serves as executive vice president of The Trump Organization, confirmed the hotel’s sale. Then he appeared to blame it’s failure on… Democrats?

The Trump International Hotel (2016-2021) Is survived by a legacy of political corruption, six other bankruptcies, and Eric. In lieu of flowers, send money to Donald Trump’s legal defense fund.

“Heavy hearts all around,” the 37-year-old wrote. “I think it’s safe to say no public figure in the history of the United States has been persecuted the way President Trump has.”

Seriously, what a drama queen.

We’re not sure how Donald Trump’s crappy D.C. hotel hemorrhaging more than $70 million over a three year period and being forced to close as a result has anything to do with him being “persecuted” by Democrats, but whatever. As usual, Eric’s talking out of his ass.

The Wall Street Journal first reported the sale of the property over the weekend. The Trump name will likely be stripped from the facade sometime after the new year, before the building is saged, sanitized, and rebranded.

The sale is reported to be worth $375 million, which is $125 million less than Trump originally wanted.

Umm! Can someone tell me how Eric Trump concluded that Democrats are to blame for the Trump Hotel in DC closing?

News of the hotel’s sale comes shortly after Trump was kicked off Forbes’ list of the 400 richest people in America, a coveted group he’s belonged to for more than two decades. We’re sure that’s the Democrats fault, too.