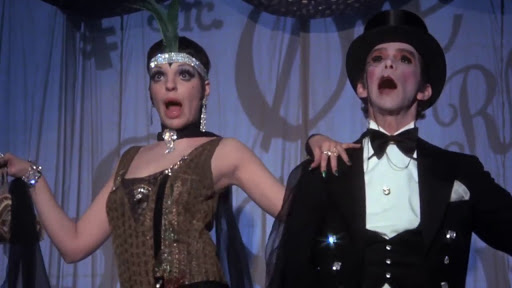 Film historians often cite a single film as the turning point where old-style bust-out song & dance Hollywood musicals finally became passe: Bob Fosse’s Cabaret. Released in 1972, and based on the Kander & Ebb Broadway hit, the film integrates songs organically into the plot; we’re as much watching a character perform as we are a full-on production number. The most successful contemporary musicals–Chicago, Dreamgirls, Hedwig and the Angry Inch–often use a similar gimmick to win over an audience or to avoid seeming too much like a music video.

Even without its style innovations, Cabaret stands as a monumental achievement in film. Plot-wise, the movie abandons most of the stage plot, more directly adapting gay author Christopher Isherwood’s Berlin Stories, which inspired the theatrical version. The story follows Brian (Michael York), a bisexual writer living in the final days of pre-Nazi Berlin. There he meets a would-be actress who performs in a seedy nightclub, Sally Bowles (Liza Minnelli). With her party-hard lifestyle, irreverent attitude and undeniable bravura, she fascinates Brian, and the two become best friends and lovers. As Berlin becomes more and more violent with antisemitism and homophobia, Sally and Brian begin a three-way affair with Max, a wealthy benefactor. With the Nazi rise becoming undeniable, Brian and Sally must decide how to spend their futures: mundane married life in England, or continuing the party in Berlin as the world falls down around them.

Minnelli gave one of the best performances in the history of the movies in Cabaret, and won a well-deserved Oscar for her work. Ditto Joel Grey as the Emcee of the Kit Kat Club, and director Fosse. The music of Kander & Ebb produces one smash number after another, with tunes like “Maybe this Time,” “Mein Herr,” and “Cabaret” electrifying the screen, and the film’s treatment of Nazism rising out of banal daily life should terrify viewers. Musicals rarely ignite the screen like this…or get this scary.