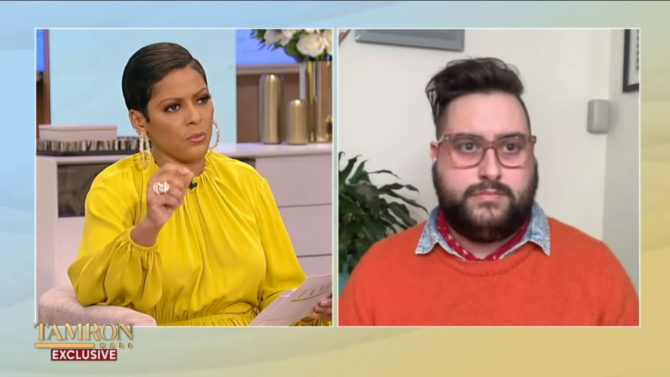 Just shy of a year after his disqualification from RuPaul’s Drag Race, Joey Gugliemelli–better known as his drag alter-ego Sherry Pie–seems to have positioned himself for a comeback attempt.

Gugliemelli appeared on The Tamron Hall Show this week to address the sexual harassment scandal that prompted his firing from Drag Race. Over a ten-year period, Guliemelli posed as a casting assistant or casting director advising other young actors on their careers. That also often involved convincing actors to film audition scenes at least partially nude and reciting a sexually suggestive monologue. Just after the premiere of RuPaul’s Drag Race Season 12, a number of victims came forward with their stories of Guglamielli’s coercion and manipulation. The producers of the show fired Gugliemelli from the show in response to the allegations. [A more detailed telling of the story can be found here, as an exclusive Queerty investigative piece.]

The Tamron Hall interview featured Gugliemelli telling his side of the story: that he suffers from borderline personality disorder and had given up performing in the wake of the catfishing scandal. The Tamron Hall Show also ran the interview over the public objections of Gugliemelli’s victims, including those of Ben Shimkus, the actor who first came forward about Gugliemelli’s misconduct.

Now Entertainment Weekly reports that despite Gugliemelli’s assertions, he has resurrected his Sherry Pie act. According to the magazine, Sherry Pie performed in shows in Beacon, New York throughout 2020, with the most recent falling in November of last year. Gugliemelli also admitted as much to the outlet.

“It’s just a space I performed at twice. There was no money or anything like that. It was very limited, testing out material that I’d been working on,” Gugliemelli told the magazine. “It was very few people…it’s a space that I know the person who owns it personally. It’s not like a venue.” He added that he estimated only about 15 people in attendance for each show.

Another piece published by Entertainment Weekly also features interviews with several of Gugliemelli’s victims, all of whom criticize The Tamron Hall Show for running the segment over their objections. The victims expressed their hurt at not being invited to share their stories on the show, making it a one-sided imbalance in Gugliemelli’s favor. The show did include a brief disclaimer, acknowledging the online backlash.

“Tamron seems very pleased with herself for having exposed a sexual predator who is actually able to admit the fact that this happened. But, he did that a year ago [in his Facebook apology],” Ben Shimkus told the magazine.

“If it was so easy to bring on a writer to talk about things that happened, how difficult would it have been to ask one of the victims to come on the show?” Lillyman wondered.

Gugliemelli, for his part, claimed he did the interview with Tamron Hall to “help in whatever way of healing” the victims. “I felt like I needed to apologize to the victims and to the masses…This isn’t me launching my comeback tour… I’m not performing. I’m not seeking out gigs right now, I’m just trying to heal the wounds that I’ve caused in the community because I know how much I’ve hurt this community that I do love so much, and how much I’ve hurt these people that I do love so much.”

Contrary to Gugliemelli’s assertions, however, Entertainment Weekly did discover that the drag queen has been working with public relations representatives to help tell his story and rehabilitate his image. His website has relaunched with a new merchandise section labeled “coming soon.” He is also apparently still represented by Spectrum Talent Agency for bookings. The agency also monitors his social media accounts.

Queerty reached out to Ben Shimkus regarding the aftermath of Gugliemelli’s appearance on The Tamron Hall Show, and the subsequent pieces run by Entertainment Weekly.

“I cannot tell you the amount of anxiety I felt from that interview happening,” he told Queerty in an exclusive interview. “I have never felt my heart beat faster in my whole life.” He went on to detail how, in the wake of the Tamron Hall interview, he’d had to endure renewed harassment and bullying on social media, something that started when he came forward last year.

“Joey deserves a comeback once he has shown even the smallest attempt at rectifying the hurt we’ve all had,” Shimkus told us. “It doesn’t look like the same rinsed and repeated apology I heard five years ago, just on national television. It doesn’t look like a relaunch of a website with merch. And it doesn’t look like hiring a PR team that somehow presents him as “introverted.'”

“If Joey can’t come to terms with this, then his comeback should be in a separate career out of the public lens. He shows no remorse,” he added.