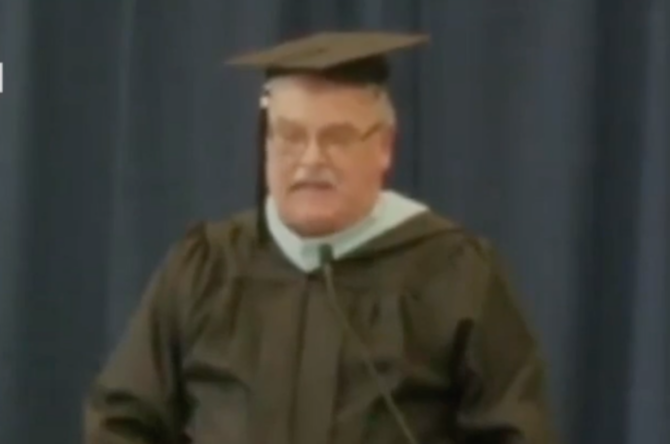 On June 3, “distinguished alumni speaker” Jim McGuire addressed the 105 graduating students and advised them to “choose biblical principals” when entering into relationships.

“Choose a spouse, I suggest,” he said.

He continued: “I also strongly suggest to make sure to choose biblical principles, you know, a male with a female and female with a male.”

LGBTQ students in particular were understandably taken aback by the remarks. 18-year-old graduate Cassidy Osipow, who identifies as a lesbian, told 5 News “it was supposed to be the day that I was finally free from all the stuff that I’d experienced in high school. I couldn’t really be myself around people at my school because I felt like they were going to not accept me for who I was.”

Osipow remembered hearing the comments and thinking “This can’t actually be real.”

When it came time to walk across the stage and shake McGuire’s hand, she opted out.

“He held his hand to me and said, ‘Oh, good job,’ but I just walked by him because he shouldn’t have been able to be in the room after that anyway,” she said.

Related: Ron DeSantis is so scared of queer student activist Jack Petocz that he sicced security on him

Superintendent Adam Wickham said in a statement afterwards that, “Any views expressed by the speaker during his commencement speech reflected his personal beliefs.”

“As with all alumni speeches in past ceremonies, the speech was not reviewed by anyone on the River Valley administrative team or board of education.”

Wickham also promised that the “River Valley administrative team will be reviewing our processes for future ceremonies,” but that came as little comfort to students.

“I think we were all expecting an apology in that email and they just tried brushing it under the rug,” Osipow said.

“I was surprised that the school didn’t respond quickly to say that was uncalled for and inappropriate,” said Osipow’s step-father, Tony Fisher.

He added: “I knew my two daughters were taken aback and I was embarrassed that the school board put that gentleman in front of my daughters and put him in front of so many individuals that day.”

5 News spoke with “dozens” of other students who were “embarrassed and disappointed” by the event and the school’s half-hearted response.

“I’m definitely going to remember this graduation now that’s going to be like a negative thing that I had to hear,” Osipow added.

“I feel like I’m not going to really miss being in school… that’s probably what I remember the most [from graduation] – is that I finally get to just be done with it.”