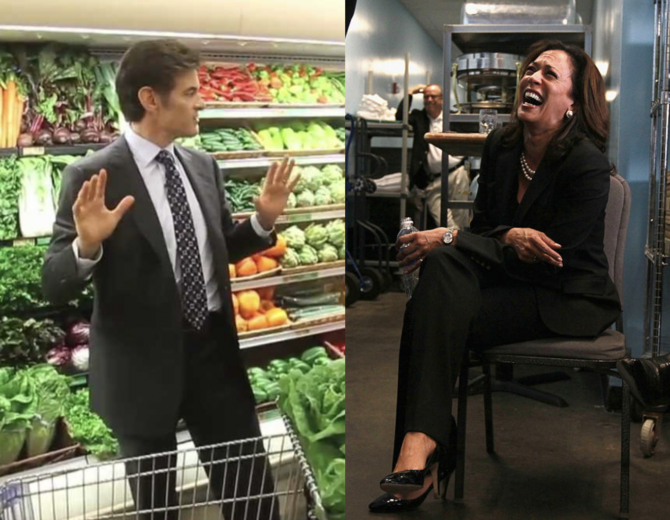 After his wife sent him to Wegman’s to pick up ingredients for crudité last week, U.S. Senate candidate Dr. Oz posted a video attacking Vice President Kamala Harris for the rising cost of food in Pennsylvania.

The video takes Harris’ viral “We did it, Joe!” clip and quotes the VP completely out of context by implying she’s talking about jacking up the price of groceries and not winning the 2020 election.

“Hey @VP, while you’re in Pennsylvania, make sure you swing by a grocery store to see how much your Administration has raised food prices. You did this,” Oz, who lives in New Jersey but is running for U.S. Senate in Pennsylvania, tweeted.

Hey @VP, while you’re in Pennsylvania, make sure you swing by a grocery store to see how much your Administration has raised food prices. You did this. pic.twitter.com/fbjotdBkBO

What Oz doesn’t mention in his attack ad against Harris is how his most recent financial disclosure statement lists his wealth at more than $400 million, which would make him one of the wealthiest senators if he is elected.

Related: Dr. Oz is running a more abysmal campaign than Caitlyn Jenner did, if that’s even possible

He also doesn’t offer any ideas for how he might fix the problem, which he clearly doesn’t understand to begin with. The vice president has absolutely no control over what grocery stores charge for items. In Oz’s defense, however, he’s a TV doctor, not an economist.

Dr Oz visited a grocery store for the first time in his life and can’t stop going on and on about it.

You want to be on politics yet don’t understand what causes inflation?🤡

No she didn’t. World wide Covid pandemic disrupting supply lines did this.

Do you even know where a grocery store is? 🤔

Mehmet do you have a plan? Or is your plan to blame?

Like you grocery shop? Or cook? We’ve seen your houses in Florida

Hey Dr. Green Beans next time you’re on the internet Google “Dr. Oz quack” and see how many hits you get. You did this.

No need. Just show her your captivating and comprehensive crudités video from last week.

Are you jealous because she’s actually been to Pennsylvania?

Subscribe to Queerty for a daily dose of #politics #dr.oz #joebiden stories and more