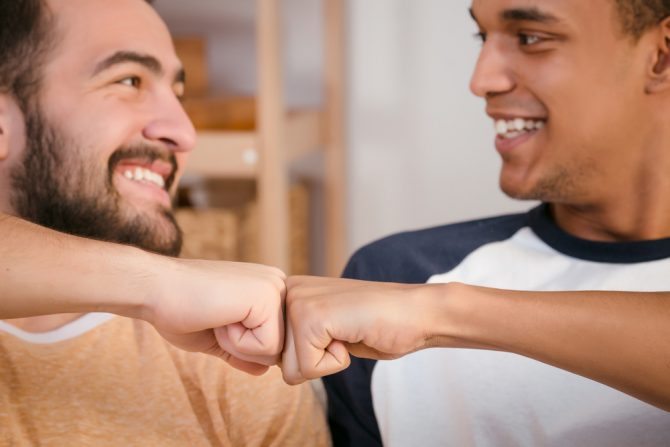 A straight dude says he’s been thinking more and more about hooking up with his straight dude friends, but he isn’t sure what the appropriate protocol for that sorta thing is, so he’s seeking advice from sex gurus Rich Juzwiak and Stoya over at Slate.

“I am a straight man and I have a girlfriend who travels a lot,” the man’s letter begins. “When she is gone, my straight guy friends (some married) come over and chill.”

The man continues, “By the end of their time at my home, there is usually some reference to banging. Sometimes this gets kind of awkward, and they talk about relieving themselves. I’m not sure if I’m reading too much into this, but it feels close to happening—between us.”

The man says he isn’t sure what to make of it. Does he wanna do it? Does he not wanna do it? Should he? Shouldn’t he? It’s all very confusing.

“I don’t know how I feel about getting sexy with a group of men or just one of them,” he writes. “I am wanting to know if it is ‘socially’ OK to have casual sex with your straight friends wondering if you would have to consider yourself gay if you did.”

In their response, both Stoya and Juzwiak think the guy is getting a little too hung up labels.

“I think there will always be people whose preference for one side is so firm that they are effectively one or the other,” Juzwiak says, “but I think for many—as minds open, and taboos loosen—they’re going to find themselves in the gray area of the middle.”

“There is no one-drop rule for sexuality. Having gay sex does not make someone gay.”

Stoya agrees, adding, “Most of us are much more attracted to details more specific than gender, even if we’re singularly attracted to people of one gender. So I’m wary of that when these labeling questions come up.”

“I like to say: If a label doesn’t work, use a sentence,” Juzwiak says. “If that isn’t sufficient to describe you, take a paragraph. Hell, write a book!”

“I suspect we’re going to be seeing an increasing amount of paragraph-identities in the future,” Stoya adds. “Go ahead and get yours ready.”

Related: Straight dude in a panic after watching “sexual things men do with one another” turns him on