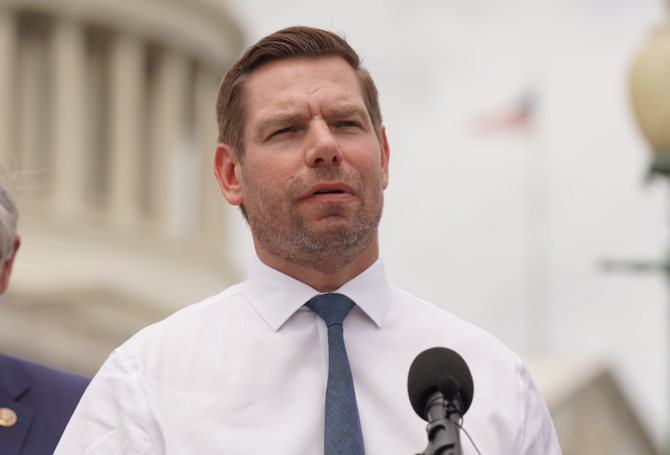 Rep. Eric Swalwell has shared an unhinged death threat he received from a person who claimed to be a gay man.

Taking to Twitter on Tuesday, the California Democrat and outspoken LGBTQ  ally wrote that, “A staffer of mine — who’s 1 month into her job — received a call from a man saying he’s coming to our office w/ an assault rifle to kill me.”

Related: Lauren Boebert rages after Rep. Eric Swalwell shares these photos of her

He continued: “I hesitate to share this but how else do I tell you we are in violent times, & the architects are [Donald] Trump & [House Minority Leader Kevin] McCarthy. Bloodshed is coming.”

Swalwell also posted a memo written by the staffer describing details of the call. It reads:

Subject: Threat received around 11:30 am

Asked me about where congressman Swalwell is currently. Asked if he could talk to him. Went on a rant regarding gay issues. Said he is a gay man, but he doesn’t take it up the a** he gives it. Used the F slur several times. Mentioned he has guns and wants to “F*ck him up.” Also made a statement that he will come to the office, or to wherever he is at to hurt him. He will bring guns (AR-15s) to the office to kill him and f*ck him up. He said his name is [redacted] on a second call, we got a minute 30 second recording of him using the f slur after he made the threat.

If the caller really is gay, the bottom shaming and F-bombs indicate quite the web of self-loathing. Of course, given the actual death threat, internalized homophobia is just the tip of the iceberg of likely mental issues.

Violent rhetoric from right-wing extremists targeting the federal government have increased since the FBI’s raid of Mar-a-Lago.

Trump and several high-ranking Republicans, McCarthy among them, have vilified the Department of Justice for supposedly becoming politically weaponized, despite the fact that the search uncovered many highly classified documents in the former president’s possession.

This isn’t the first time Swalwell has received death threats. In June, he shared a voicemail from someone threatening to kill his children.