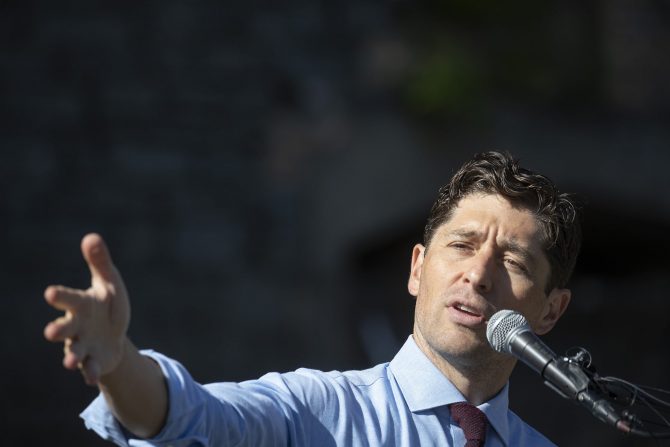 Move over Justin Trudeau. There’s a new hunky liberal politician in the stratosphere and his name is Jacob Frey, the 38-year-old mayor of Minneapolis who everyone’s been talking about after he owned Donald Trump on Twitter this morning.

It all started when Frey’s office requested Trump pay $500,000 ahead of a MAGA rally scheduled for this Thursday in Minneapolis. The fee is to cover the costs of stuff like cops, traffic police, crowd control, and all that other boring stuff that’s needed anytime a politician, especially the President of the United States, comes to town on a reelection effort.

In response, Trump’s reelection campaign manager Brad Parscale called the $500,000 tab “an outrageous abuse of power by a liberal mayor trying to deny the rights of his own city’s residents just because he hates the President!”

Trump himself took to Twitter to call Frey a “lightweight mayor” who only wants to hurt MAGA supporters. To which Frey responded: “Yawn… Welcome to Minneapolis where we pay our bills, we govern with integrity, and we love all of our neighbors.”

Yawn… Welcome to Minneapolis where we pay our bills, we govern with integrity, and we love all of our neighbors. https://t.co/v1cXvoD9uR

When Trump responded by calling Frey a radical leftist whose actions were “probably illegal,” Frey replied: “Someone tell the President of the United States that he can afford to help pay for the extra time our officers will be putting in while he’s in town.”

Someone tell the President of the United States that he can afford to help pay for the extra time our officers will be putting in while he’s in town. https://t.co/bXITaPdW4E

Frey’s tweets quickly went viral, not only for their epic #clapbackery, but because, as one person on Twitter noted, “Mayor Jacob Frey is HOT.”

But don’t just take our word for it. Check out these pictures from his Instagram page…

Hard at work, but moving quickly (and creatively) thanks to an assist from our friends at @firstavenue & @surlybrewing

Clean energy never tasted so good. Fresh Energy, Rob Davis, @56brewing & Sarah Clarke (literally the first investor with $20) all collaborated to make a truly clean energy beer. Pollinators friendly plants are planted around solar panels, and the honey is collected to make excellent beer. Tastes like a meadow – and our environment says thank you!

Oh, and here’s a video of him from a few years ago singing the holiday classic “Winter Wonderland.” (Great angle!)

Now, we hate to disappoint, but Frey is not LGBTQ. (Whomp, whomp.) He’s married to a lobbyist named Sarah Clarke. But he is a huge LGBTQ ally.

Before he was elected mayor, Frey was endorsed by the Stonewall DFL in his successful race for the Minneapolis City Council.

As mayor, he oversaw the revitalization of several rainbow crosswalks in the city.

He also marched in this year’s Twin Cities Pride parade, posting pictures and videos of the celebration to his social media pages.

And just last month, he helped the city update its non-discrimination ordinance protecting LGBTQ people for the first time since 1975.

Mpls became the 1st city to pass a non-discrimination ordinance for the LGBT community in 1975. But we still have a long way to go — it is appalling in 2019 that trans individuals have been banned from military service.

On top of all that, he has a deep appreciation for drag culture.

What to do on Saturday morning? Drag show @lushmpls of course! And I got to meet the one and only @theceeceerussell

Ladies and gentlemen, we do believe a star has been born.

Now, how about some more pics?

Looking for a plan to address downtown crime and safety? Here's mine.

Hanging with DJ – future engineer and present robotics champion – at @hwmr.usa I feel like a shlub next to this stylish dude.