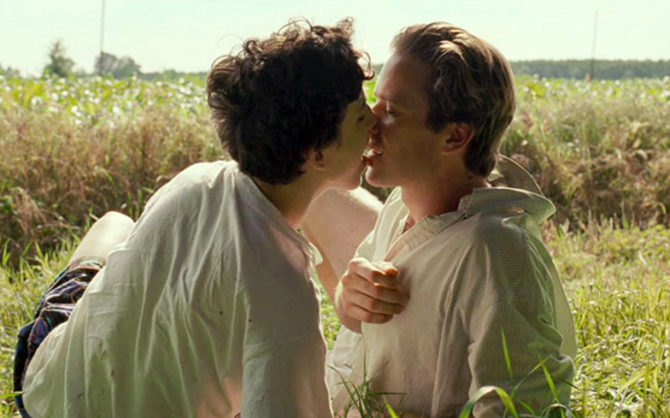 Moviegoers, not to mention Academy of Motion Picture Arts and Sciences voters, clearly saw a lot in director Luca Guardagnino’s dreamy adaptation of Call Me By Your Name.

But there’s one — or in this case, two — things that were definitely not featured in the film’s final cut. Or maybe uncut. We’ll never know.

And while Guardagnino has previously stated that he never intended to include more nudity in the film, a highly credible source has called BS.

James Ivory, who won the Oscar for writing the film’s screenplay, says his original script called for full-frontal from both the film’s two stars. Both Timothée Chalamet and Armie Hammer‘s contracts, however, nixed that plan.

Related: Well, the full ‘Call Me By Your Name’ sex scenes (including the peach) have hit the Internet

“When Luca says he never thought of putting nudity in, that is totally untrue,” Ivory told The Guardian. “He sat in this very room where I am sitting now, talking about how he would do it, so when he says that it was a conscious aesthetic decision not to—well, that’s just bullshit.”

Ivory added that seeing the scenes in the finished film in which the actors are covered up by sheets appears “phony.”

Here’s Guardagnino’s comment Ivory is referring to, in which the director told the Hollywood Reporter he was not interested in more sex scenes:

“The tone would’ve been very different from what I was looking for. I wanted the audience to completely rely on the emotional travel of these people and feel first love. I didn’t want the audience to find any difference or discrimination toward these characters. It was important to me to create this powerful universality, because the whole idea of the movie is that the other person makes you beautiful — enlightens you, elevates you.”

Ivory added more context in an interview with Variety:

“Certainly in my screenplay there was all sorts of nudity. But according to Luca, both actors had it in their contract that there would be no frontal nudity, and there isn’t, which I think is kind of a pity. Again, it’s just this American attitude. Nobody seems to care that much, or be shocked, about a totally naked woman. It’s the men. This is something that must be so deeply cultural that one should ask: ’Why?’”

Ivory was also originally slated to write and direct the film, so we can only wonder what the finished product might have looked like in his hands.

For 2017’s finest gay cinematic sex, we strongly encourage you to check out the French film BPM.