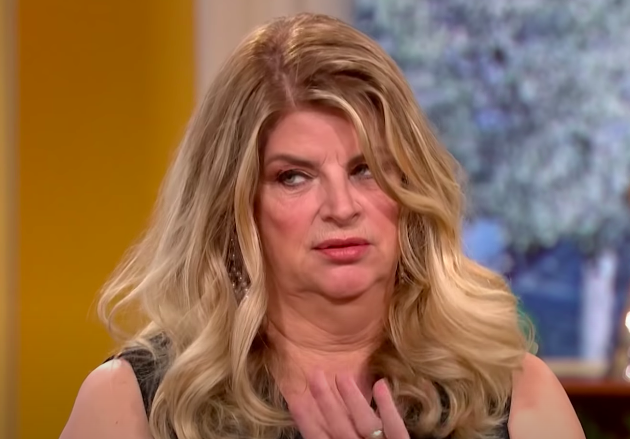 The 71-year-old has been blocking people left and right on the platform after firing off a series of incoherent tweets about, well, we’re not entirely sure.

Here’s a sampling of just some of batsh*t crazy stuff she’s been tweeting over the last 48 hours:

I can’t think of a time when differing medical opinions from HIGHLY qualified EXPERT Physicians & Scientists were being BANNED & labeled as “MIS-information.” This is the product of being dominated by the composite Entity of Big Pharma Big tech & Big government.
BIG TYRANNY

The point of freedom of speech is to be able to speak what you would like to speak. It’s not called “speak if someone tells you it’s OK to speak and if everybody agrees with it?????”

Alley, who endorsed Donald Trump in 2016 and 2020, opposes diversity in Hollywood, and believes teaching kids about LGBTQ issues and sex ed in schools will turn them into pedophiles, has also been getting into fights with complete strangers…

My God people.. if you are going to be asshats, at least be SMART assists

Telling a guy he has “a d*ck so far up your ass it can see the TV”:

Boy, it’s really lovely on here tonight. So many“lovely” people who must have nothing better to do than be “lovely”lives ???

Of course, none of this behavior is new for Alley.

After endorsing Donald Trump in 2016 got her blacklisted from Hollywood, Alley has tried to make a career for herself as a professional Twitter troll.

Unfortunately for her, being a Twitter troll isn’t an actual job that pays money. But as Albert Einstein once said, “Insanity is doing the same thing over and over and expecting different results.” So Alley keeps trying.

Here’s what people are saying about her latest antics…

If you haven't been blocked by Kirstie Alley, you aren't tweeting right.

8 inches of snow today AND a block from Kirstie Alley! It’s like Christmas all over again! pic.twitter.com/4yQSlVumEj

We need a reality show with Kirstie Alley, Kevin Sorbo, Rob Schneider, and Scott Baio. Like Big Brother, no phones or internet while they’re all in the same house.

The catch is, we don’t actually film anything and they just chill in the house by themselves forever.

Everyone shows off their blocks by Kirstie Alley when she trends. I’ll go you ALL one better… pic.twitter.com/RleSWnAgAK

Kirstie Alley is trending under "Entertainment". She hasn't been entertaining in over a decade. Annoying yes, entertaining no.

Whoa… Kirstie Alley is on a rampage. #CancelCulture pic.twitter.com/VBog7uoMfl

Kirstie Alley is a member of two cults: Scientology and Trumpism.

MAGA Lunatic Kirstie Alley is likely trending due to saying batshit crazy things, but I’m blocked, I can’t read it and I’m so happy about it. Yay me. pic.twitter.com/FsN1Kj999Q

Kirstie Alley is nuts and so are her followers it seems. One posted a video of these Canadian truckers where a little girl was holding a sign that read "just trying to grow up without getting shot".

The irony that they mean a life-saving vaccine and not assault rifles is sad.

Every time Kirstie Alley tweets, a demon gets it's horns. Just sayin'. LOL

All the fun kids are blocked by Kirstie Alley pic.twitter.com/QVJZYQ1OZf