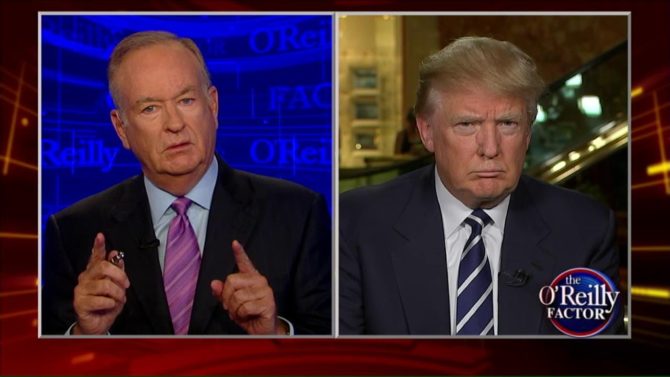 What makes the behind-the-scene stories about Fox News so interesting is that they have always barely been behind the scenes at all. The latest row involving Bill O’Reilly is hardly a surprise. The New York Times chronicled O’Reilly’s regular entanglements in sexual harassment lawsuits: five women settling for $13 million (to date). The news cost O’Reilly multiple advertisers and apparently now has forced him to take a “vacation” for a few weeks. Let’s hope the vacation is permanent.

The growing scandal around O’Reilly seems to be part and parcel of the culture at Fox News. Long-time head honcho Roger Ailes lost his job last year after multiple women came forward to tell how the Jabba the Hutt of cable news put the moves on them. And, of course, the king of the Fox Network is the president himself–you know, the guy who boasts about sexually assaulting women. (He offered a character reference for O’Reilly, of course.)

There’s no doubt that Fox News is a facing legal trouble. But in fact the stories that keep emerging underscore an inescapable truth about the network: it’s run by creeping old men for creepy old men.

Fox News has made a fetish out of selling sex for ratings. Specifically, selling images of pretty women (of a particular type). Female Fox News anchors (the blonder, the better) are well known for their short, short skirts on display under lucite desks. Under the guise of wagging a finger of disapproval, the network loves to show scantily clad women on news segments. In a classic case of having its cake and eating it too, the network tsk-tsk’d the famous photo of Kim Kardashian showing off her booty in a bikini, all the while directing people to see it on the Fox News website with this clickbait: NEWS: WHOA! Kim K. Bares Butt in Teeny Bikini.

And a particular kind of sex. It’s all about pretty, white women. You’re not going to see Shep Smith in short shorts and a sleeveless t-shirt. (Not that you’d want to.) What you’re seeing is the fantasy woman for men of a certain vintage.

Of course, the problem for the network is that the average age of its viewers is somewhere between 70 and death.

But theres’s no sign that the network wants to change. Even if O’Reilly manages to lose his job–a very big if–it’s clear that the culture at Fox News is trapped in amber from the Mad Men era (which many viewers will remember vividly and fondly). Changing that culture will take a lot of dedicated work, and despite the lip service the network has paid to being a more inclusive workplace, the fact that O’Reilly continues to reign belies the rhetoric.

In fact, Fox News somehow manages to find younger versions of the creeps it caters to. Megyn Kelly’s replaement is Tucker Carlson, who belittled a correspondent for Teen Vogue on air by telling her to “stick to the thigh-high boots.”

Now there’s an image that these dirty old men can get behind.