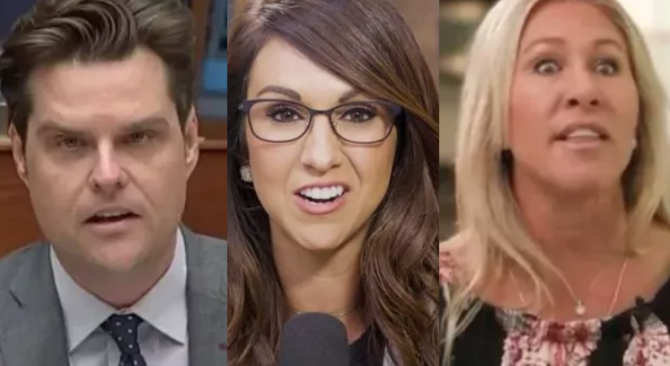 On Friday it was revealed that federal agents seized 11 sets of documents during the raid on former president Donald Trump‘s Florida residence, Mar-a-Lago. The haul includes materials marked as “classified/TS/SCI” documents — shorthand for “top secret/sensitive compartmented information.” Other documents were marked “secret” or “confidential.”

After the Monday search, Trump blasted the action as, “a prosecutorial misconduct, the weaponization of the Justice System, and an attack by Radical Left Democrats who desperately don’t want me to run for President in 2024,” which is pretty wild considering that at the time, he was one of the few people who knew exactly what the agents had discovered in his home.

And all week, the former president’s allies parroted his lies, blasting the raid as sham. The Log Cabin Republicans had a particularly cringey take.

Some of Trump’s biggest loyalists in Congress were also among those pushing the false narrative. So how are they speaking about the raid after today’s bombshell?

Let’s have a look at the before-and-after tweets from the House of Representatives’ three stooges themselves, Marjorie Taylor Greene, Lauren Boebert and Matt Gaetz:

On Monday, Greene called for the defunding of the FBI.

In another tweet, she said, “The FBI is raiding President Trump’s home in Maralago! This is the rogue behavior of communist countries, NOT the United States of America!!! These are the type of things that happen in countries during civil war. The political persecution MUST STOP!!!”

She also posted an image of an upside-down US flag (whatever dog whistle that might be to her followers).

Now that it turns out the FBI’s search for classified documents proved fruitful, Greene has done the responsible thing and posted about…a group of high school football players who saved someone from a locked car?

These young men are true heroes!

Putting others above themselves and setting an example for everyone to follow.

Couldn’t be prouder of this group of Rome High School football players!!https://t.co/Ma5g2BP2JY pic.twitter.com/HGthVuMka7

Sounds like a nice story and all, but Greene has said exactly nothing about the raid today.

Okay, if Greene isn’t going to acknowledge the GOP elephant in the room, how about Lauren Boebert?

On Monday, the Colorado rep. told her colleagues: “If you’re a Republican with any kind of voice, and not speaking up for President Trump tonight don’t expect any of us to speak up for you when your time comes. You may not realize it yet, but they’re coming for all of us.”

She later posted a video saying she was “pissed” and calling the raid “totally un-American.”

“This is Gestapo crap and it will not stand … I will make sure these tyrants pay the price.”

This #DepartmentOfInjustice must be held accountable.

It was President Trump today, but it’s you next if we don’t take a stand. pic.twitter.com/z9wqynaikg

Cut to four days later, and as the news of the recovered documents dominates headlines, Boebert thought it was the perfect time to forget about the story altogether and focus on “Bidenflation”!

Biden saying there was 0% inflation in July is like when stores have liquidation sales, mark everything up 100% and then slap a 25% discount sticker on it.

You really nailed that one, hun.

Florida Rep. Matt Gaetz, a man who knows a thing or two about FBI investigations, tweeted: “I stand with President Trump” after the raid.

I stand with President Trump!

He went on Newsmax the next day and said, “If the FBI and the DOJ are cheating to try to ensnare President Trump in criminality, it wouldn’t be the first time they’ve done it and we caught them redhanded last time.”

.@RepMattGaetz: "If the FBI and the DOJ are cheating to try to ensnare President Trump in criminality, it wouldn't be the first time they've done it and we caught them redhanded last time."

Gaetz also strongly criticized fellow Republicans who wanted to wait and see how the investigation played out before spouting judgement.

That's exactly what Weak Republicans were saying during the Mueller Witch Hunt! pic.twitter.com/LzWq5Sl9ez

Now that it has “played out” a bit, what has the lawmaker posted to his official congressional Twitter account?

Nothing at all. Brave.