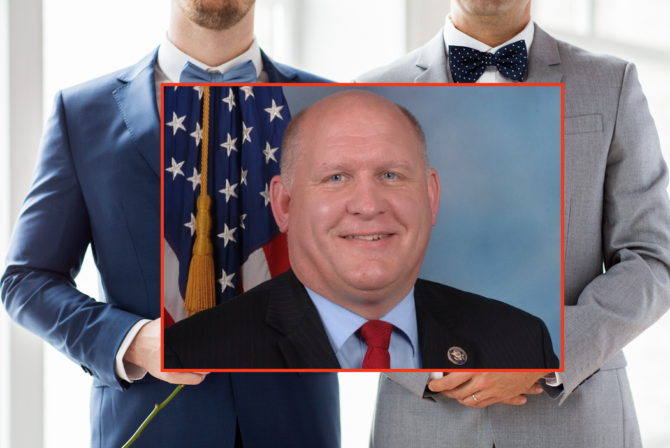 GOP Rep. Glenn Thompson of Pennsylvania said — through a spokesperson — he was “thrilled to attend and celebrate” his gay son’s wedding on Friday. Congrats to the happy couple! But it sure is awkward that, just three days earlier, Thompson cast his vote against a House bill that would protect marriage equality.

The Pennsylvania lawmaker was one of 157 Republicans to vote against the Respect for Marriage Act, which seeks to repeal the Clinton-era Defense of Marriage Act and require federal recognition of same-sex marriages in the United States. It’s now headed to the Senate, where it faces an uncertain fate.

Related: Pete Buttigieg highlights the GOP lawmakers living in the past

The House vote came about after the Supreme Court decided last month to overturn Roe v Wade, sending the issue of abortion back to individual states. Many of those states have since made access to abortion impossible or highly restricted.

Justice Clarence Thomas, in his concurring opinion on the ruling, said the court should look again at Obergefell v. Hodges. That 2015 case legalized same-sex marriage across the U.S.

Thompson was one of a number of Republicans to condemn the legislation as a cheap electoral gimmick by Democrats. However, 47 of his GOP House colleagues disagreed and crossed the aisle to protect the hard-won rights of LGBTQ Americans.

“This bill was nothing more than an election-year messaging stunt for Democrats in Congress who have failed to address historic inflation and out of control prices at gas pumps and grocery stores,” spokesperson Maddison Stone said.

Thompson’s son told NBC News that he “married the love of [his] life,” and Stone reported that Thompson is “very happy” to welcome his new son-in-law into the family.

We can only imagine the toast he gave at the reception.