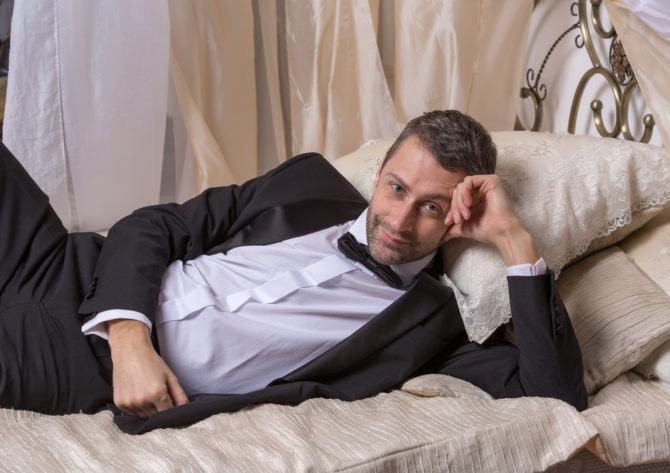 Some guys are sent “into gay fabulosity” when a certain song comes on. Others just let their queer flag fly when their gaydar pings.

The latter phenomenon is the subject of a recent Reddit thread titled, “Does anyone else turn their ‘gayness’ up to 11 when they see another guy that might be gay?”

“The other day at the store, I saw this guy who dressed and walked pretty ‘gay,’ and as a result, when I walked by him, I started acting a little bit gay myself, as in certain mannerisms and the way I was holding my basket changed to give him an idea that I was gay, too,” the original poster wrote. “Now, I wasn’t trying to hook up with him or anything, we were both just grocery shopping and minding our own business, but I felt strangely excited, like when two stranger dogs meet and get excited because they know they’re both dogs (if that makes any f*cking sense).”

“This needs video with a voiceover narration,” one commenter quipped. “Morgan Freeman would be a good narrator: ‘The male, having spotted a possible mate, exaggerates his movements to draw attention to himself…’”

But plenty of guys could relate to the OP’s experience. “This happened to me yesterday with a cashier who was clearly gay,” another commenter wrote.

“If I’m watching a show with a really sassy guy, like if I’m watching Queer Eye and JVN starts being his wonderful self, I feel empowered to embrace my more flamboyant side,” said a third. “I’m currently watching old seasons of Project Runway and one of the guys is that bitch and he makes me feel like a queen.”

A different user, meanwhile, said he doesn’t up his gayness in general, “only while watching [RuPaul’s Drag Race] with friends.”

And if you need a visual, one hero of a commenter provided a link to this immortal Brian Jordan Alvarez video: