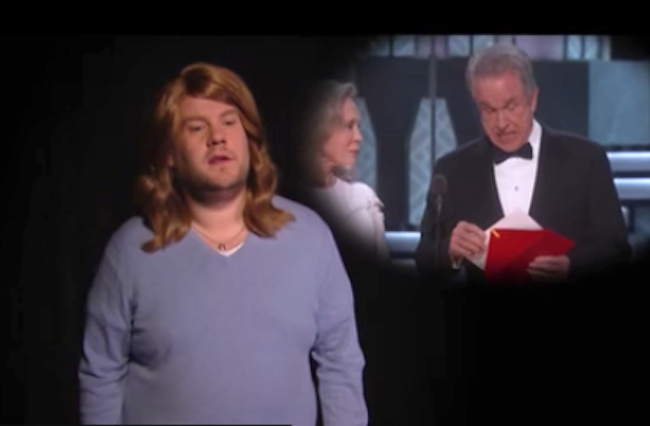 A historic gaffe, the great envelope switch-up of 2017 is the stuff great satire is made of.

Knowing this, James Corden wasted no time in spoofing the mishap on Tuesday’s edition of the Late, Late Show, pulling on his best Emma Stone drag to burst into song about that fateful moment at the 89th Academy Awards.

“Was this a mix-up, a conspiracy, a fix-up or was Warren Beatty just blind?” s/he warbles.

A bit of backstory for that one guy who doesn’t know: On Sunday evening, presenters Warren Beaty and Faye Dunaway had the honor of awarding the Oscar for Best Picture, announcing to the packed house and millions of TV viewers that La La Land was the victor.

The crowd erupted into applause, and amateur Oscar predictors the nation over breathed easy. Everyone expected the film to win.

But then something truly strange happened. A member of team La La Land took the mic to announce that there had been a mistake. “Moonlight won best picture.”

Apparently, Beaty and Dunaway read off the wrong card — one that listed Emma Stone winning for best actress — when they announced the winner.

As Moonlight’s shocked cast and crew assembled on stage, host Jimmy Kimmel made a joke out of the enormous mistake, telling the La La Landproducers, “I’d like to see you win an Oscar anyway. Why can’t we give out a whole bunch of them?”

Like we said, the (awkward) stuff satire is made of.