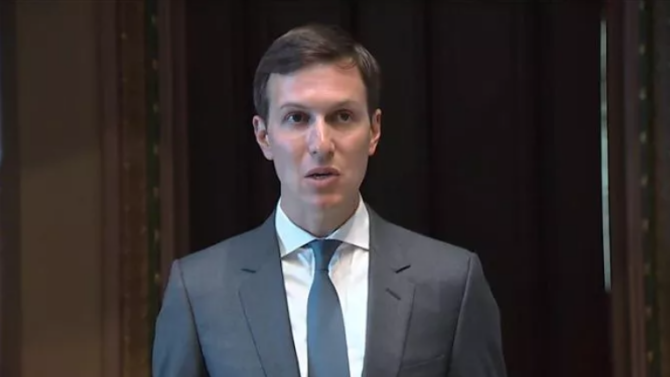 A searing new article describing “the real Jared Kushner” has been making the rounds on social media, and boy, do people have strong feelings about him.

In “Shame Cometh: The Jared Kushner Story,” novelist and journalist Greg Olear presents a blistering highlight reel of Kushner’s lineage and misdeeds. Olear profiles his esteemed grandparents, “a heroic Nazi-fighter and a great builder,” and his power-hungry, criminal father. As Olear proceeds to list Jared’s own “accomplishments,” it’s clear Kushner followed in his father’s footsteps — and then some.

Jared is described as an “intellectually lazy” student with “subpar” SAT scores who only got into Harvard after his father donated millions to the university.

Olear suggests that Jared married Ivanka Trump as a power-grab. “Certainly there was no discernible passion on the part of either party, and plenty of lurid rumors. The wife would later describe their first date as ‘the best deal we ever made,'” he writes.

Related: It sure sounds like Ivanka has laid the groundwork to flip on her father

After Ivanka’s father decided to run for president as a Republican, Olear says Jared abandoned any political morals he might have still had to do whatever it took to help him succeed.

That included illegal meetings with Russians and princes from Saudi Arabia and the United Arab Emirates.

“Later, his buddy the Crown Prince had a dissident journalist murdered, the body hacked in pieces with a bone-saw. It is widely believed that he knew about the threat to this journalist, but did nothing to warn him.”

Olear calls Jared’s work on issues ranging from the opioid crisis to the Covid pandemic “a catalogue of failure.”

“During the early days of the pandemic, he set up a shadow task force to devise an appropriate response,” the article states. “When that task force gave him its recommendations—masks, contact tracing, federal coordination of supplies, etc.—he ignored them. The virus, he saw, was hitting the Blue States the hardest. It would help his father-in-law politically, he came to believe, if the pandemic continued to rage in those states. This way, his father-in-law could blame the governors of those states, who were all Democrats, for the escalating public health crisis, avoiding responsibility. So he decided to scuttle the plans given him by his own task force, and let the virus run amok.”

Jared Kushner is gonna go through some stuff.

Remember when Jared Kushner was the elephantine brain guiding our COVID response?

He misled the public with Trump's junk science & pushed Americans back to work before it was safe to prop up the economy losing hundreds of thousands of lives.

Kushner is a murderer.

A sociopathic grifter who married into a family of grifters & used his WH position to sell state secrets to Saudi Arabia. He was probably involved in the #JamalKhashoggi murder. pic.twitter.com/nWZCsGKyer

Jared Kushner should have NEVER been allowed to have his level of security clearance in the White House, as a completely inexperience and non-qualified 'senior adviser.' Who knows what secrets he could have told/traded/sold to Israel and Saudi Arabia. pic.twitter.com/dLE63BlWm1

The Jared Kushner Story? I think I've seen that before, but I remember it being called "How to Succeed in Business Without Having Any Talent or Integrity".

Jared Kushner is as bad as he seems.

I don’t need @gregolear’s article to tell me Jared Kushner is a sinister POS who belongs in prison, but damn it sure does help ??

The Jared Kushner story isn’t over. He is yet to get his comeuppance.

Jared kushner story: he loves money and power and nothing else matters. Oh and the FBI should keep an eye on him because he knows a lot about homeland security for someone who didn’t have security clearance.