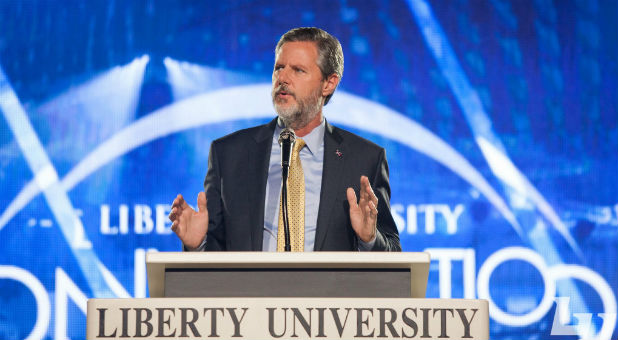 It’s been a looooong week for Jerry Falwell Jr.

On Tuesday, news broke that Michael Cohen allegedly helped stop the release of x-rated photos of the antigay activist shortly before he endorsed Trump for president in 2016.

According to Reuters, Falwell contacted Cohen seeking help regarding an “embarrassing personal matter” involving him, his wife, and their 20-something pool boy, er, pool attendant.

Not long after the story broke, Falwell’s lawyer put out a statement saying the allegations were false, telling The Washington Post, “There are no compromising or embarrassing photos of Falwell, period!”

Meanwhile, Falwell went on the Todd Starnes Radio Show to further deny the story, telling the conservative radio host, “This report is not accurate. There are no compromising or embarrassing photos of me.”

Now, Yonat Shimron over at Religious News writes that “the allegations of racy personal photos call into question Falwell’s own behavior and whether they align with evangelical sexual mores.”

She continues, “While no one has accused Falwell of viewing pornography or straying outside his marriage to Becki, his wife, his alleged use of photos may be a sign that the culture of nude selfies may have reached Christian institutions–as has the widespread viewing of pornography.”

“Many schools, including Liberty University, have strict codes regarding sexual misconduct,” she writes, “including the viewing and sharing of pornography and nude or indecent photos.”

Involvement with pornographic, obscene, indecent, or other similarly offensive materials, expressions, or conduct is inconsistent with the Personal Code of Conduct and the Christian World View of the College and University. Use of the University’s computing network to obtain or distribute such materials constitutes a violation of the Code.

Which begs the question: If Falwell Jr. was involved in some sort of x-rated photo shoot, how might this affect his employment at the university his father founded and where he currently serves as president?

The school has yet to issue any statement about the sex scandal, which seems to be growing by the day. Instead, it has been trying to distract people from the whole thing by hawking tacky Liberty University graduation swag on Twitter:

Graduation is a milestone in your life, and wearing a keepsake of your alma mater is a great way to showcase your Liberty pride: https://t.co/Cz5RlBLK3M. #LUGrad pic.twitter.com/b0LDooGAGt

Because, when all else fails, wave something shiny in people’s faces.

Subscribe to Queerty for a daily dose of #politics #jerryfalwelljr. #karma stories and more