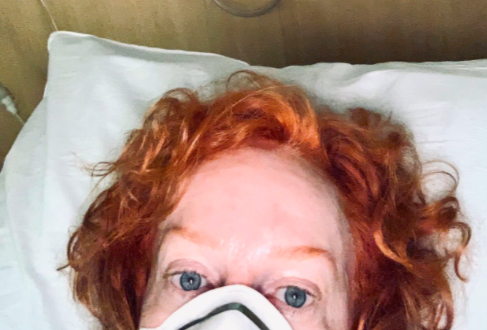 Kathy Griffin has been released from a Los Angeles hospital where she was being kept in isolation for what she described as “unbearably painful symptoms” of coronavirus. She is now recovering at home from an apparent abdominal infection. But Griffin says she still has no idea if she has coronavirus thanks to the ongoing nationwide shortage of testing kits.

Earlier this week, Griffin took to Twitter to refute a tweet from Donald Trump, in which he falsely claimed more patients have been tested for coronavirus in the U.S. than anywhere else in the world.

“He’s lying,” she wrote. “I was sent to the #COVID19 isolation ward room in a major hospital ER from a separate urgent care facility after showing UNBEARABLY PAINFUL symptoms. The hospital couldn’t test me for #coronavirus because of CDC (Pence task force) restrictions. #TESTTESTTEST.”

He’s lying. I was sent to the #COVID19 isolation ward room in a major hospital ER from a separate urgent care facility after showing UNBEARABLY PAINFUL symptoms. The hospital couldn’t test me for #coronavirus because of CDC (Pence task force) restrictions. #TESTTESTTEST https://t.co/18fRiOBsdN pic.twitter.com/0sU9fHu4r0

Now, speaking to the LA Times, Griffin says she was shocked by the lack of personal protective equipment in the hospital’s COVID-19 unit. Some workers, she says, were not even wearing masks.

“Frankly, when they said the corona ward, I thought I would be walking into the white suits with blue-taped ceilings, everything,” she recalls. “I kind of expected them to put me in a shower room and all that–but as recently as [Tuesday], there’s no cavalry that’s coming in handing out millions of [test] swabs.”

Griffin says a chest X-ray found her lungs were clear, but an abdominal CT scan found she had an infection. After being given the option to stay in the hospital, where she may or may not eventually receive a coronavirus test, she chose to return home and self-isolate instead.

“The realization when they told me the guidelines was, ‘Wow … I now know not to come back unless my lungs are full with what feels like pieces of shattered mirror, unless I can’t breathe and unless my fever is 103 … They’re not making the rules at all. That’s a frightening feeling.”

Griffin says it’s “so obvious” that more testing kits are needed and that they much be accessible to everybody.

“A lot of people, when they hear the president saying everyone who needs a test should get one, then shouldn’t have to then go to a hospital where, frankly, they may be exposing themselves or exposing others,” she says. “Hopefully, sooner than later you can either go to a pharmacy and get one or they could deliver one at home, something like that.”