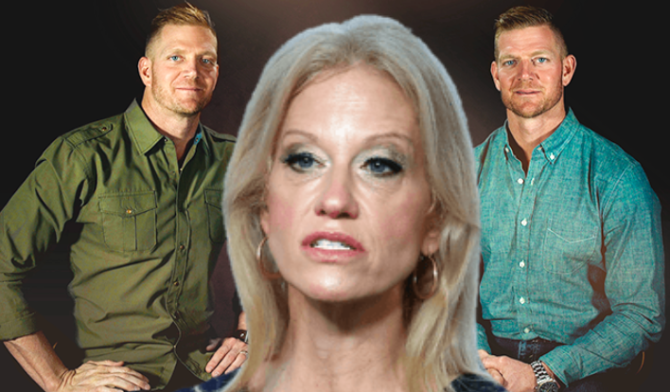 Question: What’s worse than Kellyanne Conway or the Benham Brothers?

Answer: Kellyanne Conway together with the Benham Brothers in the same place.

The hate group, er, organization claims to be dedicated to “strengthening families, by inspiring Christ-like leadership in the home, the church, and the government” and works closely with other hate groups like Focus on the Family and the FRC to push for stricter anti-LGBTQ legislation.

Naturally, the Benham Brothers were one of the first “celebrities” to sign on as keynote speakers at the summit. Now, it has been announced that national treasure Kellyanne Conway will spew her own nonsensical word salad at the event.

The organization tweeted the big announcement this week:

In a statement, Bob Vander Plaats, president and CEO of the FAMiLY LEADER Foundation, says he is “honored” to welcome “the first woman credited with successfully running a presidential campaign” to their stage.

Tickets to the summit are currently being sold for a whopping $23. Apparently, that’s the going price for hate these days.