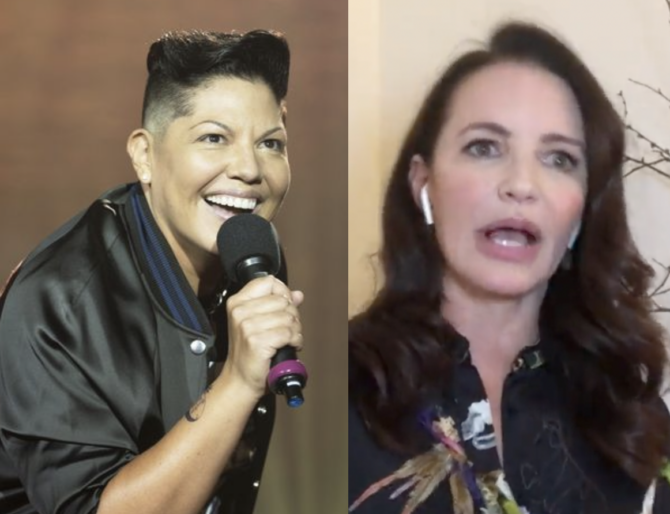 And Just Like That star Kristen Davis is offering her thoughts on one of the show’s most polarizing additions: Che Diaz, played by Sara Ramirez.

On a recent episode of Watch What Happens Live, Andy Cohen asked Davis about Che’s stand-up comedy set (if you can even call it that). Critics and audiences blasted the character’s humor as unfunny and didactic on social media.

“Oh Andy, don’t put me on the spot,” Davis begged when pressed by Cohen. “You’re going to get me in trouble with Michael Patrick [King].”

Davis went on to explain that she didn’t think the stand-up set was supposed to be funny.

“You know, I think it’s meant to be more like ‘hmmm’ type comedy, you know, ‘oooh, oh’,” she explained, somewhat awkwardly.

And Just Like That has earned a mostly negative response from Sex and the City fans and critics alike, with the character of Che Diaz drawing some of the harshest criticisms.

Defenders applaud the show for including a non-binary character (played by a non-binary actor in Ramirez), while critics have complained that the character feels shoe-horned into the action to help the show appear more “woke.” The character has also attracted criticism for their relationship with Miranda (Cynthia Nixon), causing her to cheat on her longtime husband.

Now, some thoughts on Che Diaz from the Twitterverse…

Podcasts hosts are so easy to crush on—they reliably check in with you every week—sometimes multiple times—asking nothing in return (except if you’re Patreon). Che Diaz not included.

The thing I loathe more than Che Diaz in #andjustlikethat is that crunch dry helmet wig they keep plopping on Miranda. pic.twitter.com/73P33IlbSs

I woke up waaay too early today, I learned what Che Díaz is and now I regret it.

What have they done to poor Steve? I just absolutely love him… And what are your thoughts on Miranda and Che? Is she going to get her heart broken? pic.twitter.com/n9bM7cb8pE#WednesdayWisdom #AndJustLikeThat #AJLT #Miranda #mirandahobbes #chediaz #satc

If you don't have sex with your partner for a couple of years, Che Diaz gets to fuck them. I don't make the rules. I just enforce them.

Maybe Che Diaz is doing some Andy Kauffman-esque character who is purposely dragging us through excruciating cringe and we just don’t get the joke…like it’s going way over our head.