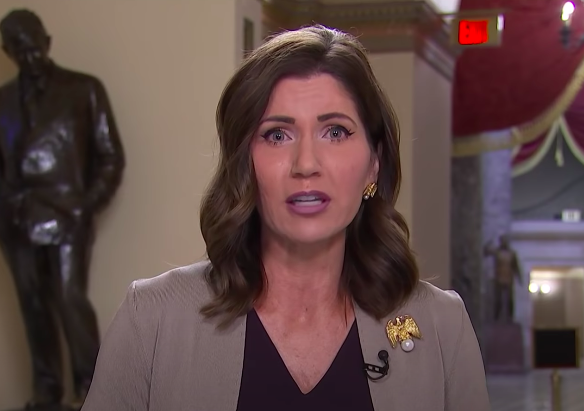 South Dakota Gov. Kris Noem is pushing back against a report published by a conservative website this week claiming she’s been having an extramarital affair with Donald Trump’s former campaign manager Corey Lewandowski.

“These rumors are total garbage and a disgusting lie,” Noem said in a tweet yesterday. “These old, tired attacks on conservative women are based on a falsehood that we can’t achieve anything without a man’s help.”

The “family values” Republican, who fears God and hates LGBTQ people, went on to say that she loves her husband, Bryon, very much and she’s not going to let this nonsense keep her from doing her job, which is running her state as deeply into the ground as possible by ignoring science and issuing draconian executive orders before her terms ends in 2023.

Rumors of the affair began when the right-wing blog American Greatness alleged Noem and Lewandowski have been seeing each other for some time now and that their relationship isn’t exactly a secret among GOP insiders.

“There are members of Congress close to Mar-a-Lago who have called the affair ‘an open secret’ and worried about Noem’s viability as a national candidate and within the movement,” a source claimed.

At the same time that story broke, another story involving Lewandowski was published by Politico alleging that he made unwanted sexual advances toward a female Trump donor at a Las Vegas charity event, where Noem was also in attendance, last weekend.

In a statement, his attorney, David Chesnoff, said, “Accusations and rumors appear to be morphing by the minute and we will not dignify them with a further response.”

In addition to allegedly hooking up with Lewandowski, Noem was also accused this week of abusing her power by using her position as governor to get her daughter Kassidy’s application to be a certified real estate appraiser approved after it was initially denied, then forcing the woman who denied it to retire, a charge she is also denying.

Here’s what Twitter is saying about the whole mess…

You can still have an affair, still love Bryon, your husband, and still be proud off the family you raised together. None are exclusive of the other.

Me, thinking about Kristi Noem and Corey Lewandowski doing it pic.twitter.com/zGXh05R2wg

The Kristi Noem alleged affair story with Corey Lewandowski is gross, but Noem’s abuse of power is so much more disgusting. Noem needs to resign.

When I just read that SD governor @KristiNoem is cheating on her husband by banging, of all people, Corey Lewandowski, I wasn't even surprised. It's always the most anti-LGBTQ (because "family values") vocal conservative bigots who are the ones cheating, f*%king, and stealing. https://t.co/olvIeDgySD

When you throw your underwear at the wall and it sticks.

What’s grosser than that?

When your best friends politically have been Aaron Schock, Corey Lewandowski and Donald Trump there very well may be something wrong with your judgment @govkristinoem

Breaking news: Kristi Noem has an affair with Corey Lewandowski.

Corey lewandowski and Kristi Noem having an affair is absolutely hilarious…..party of family values ?