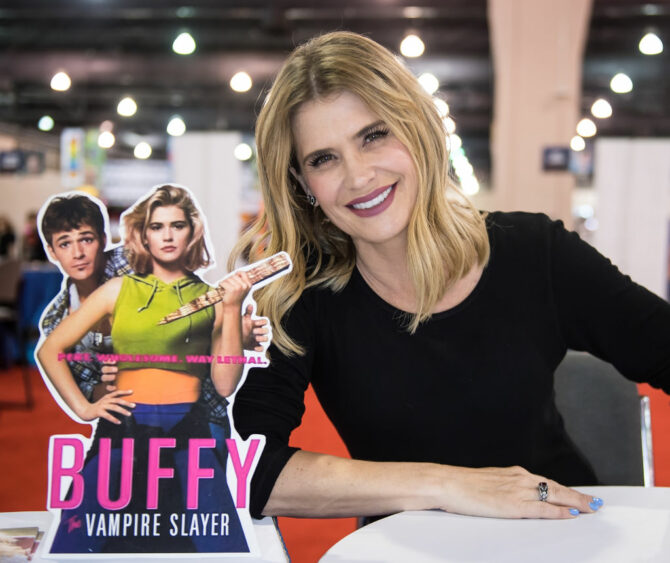 For the first time in 30 years, former actress Kristy Swanson is relevant again. Or, at least, she was for a brief moment earlier today.

Swanson, perhaps best known for starring in 1992’s Buffy the Vampire Slayer, trended on Twitter for about five minutes after making a really stupid comment about President Biden and bumper stickers.

“They claim- ’81 million votes for Biden’, and there still isn’t one yard sign, flag, bumper sticker, t-shirt or hat anywhere to be found across this entire Country [sic],” the 52-year-old tweeted at 5:40 a.m. this morning.

They claim- “81 million votes for Biden”, and there still isn’t one yard sign, flag, bumper sticker, t-shirt or hat anywhere to be found across this entire Country. ??

In 2019, she claimed she and fellow actor Dean Cain received death threats for starring in Obamagate, a stage play about Donald Trump, due to their support of the MAGA cult leader.

Now, here are some responses to Kristy’s tweet from earlier today…

The election is not until 2024. No one keeps a yard sign in their yard for 4 years.

They claim Kristy Swanson is a famous actress. Yet no movies, shows, or even bar mitzvahs to be found featuring her in this entire country.

We didn’t need signs or bumper stickers! Showing up to vote was our superpower. It’s really time for you to get over it. 🙄

This is accurate:
Kristy Swanson went on an ice skating competition and stole her partner away from his wife while she was EIGHT MONTHS PREGNANT. She is AWFUL! That’s the only kind of people who like Trump pic.twitter.com/VZusmpOXmN

Normal people, who aren’t cult followers, take their signs down when the election is over. We don’t worship our leaders, we elect them.

This may be the first time you have heard this because you don’t seem to be too bright but the way we elect people in this country is by counting how many people voted for them. We don’t elect people based on how much merchandise was bought for a candidate, which is weird to do.

81 million people are busy with their lives and their jobs.

The has-been actress is still trying to be relevant.

Damn you holding on to the election results longer than your career lasted. That’s some dedication.

Kristy,
OMG!
That’s because it’s not a cult.
Understand?

Just a minute, I can explain why there are no Biden signs, “THE ELECTION IS OVER AND BIDEN WON !”

Another statistic that may surprise you:

The average American consumes 30.6 lbs. of potatoes per year and you hardly see any potato signs. pic.twitter.com/lThjNzRzGQ

Is this supposed to be a logical argument for or against something? Does Elvis talk to you? Do you see spots?

There are a great deal of American Flags being flown all across the country.