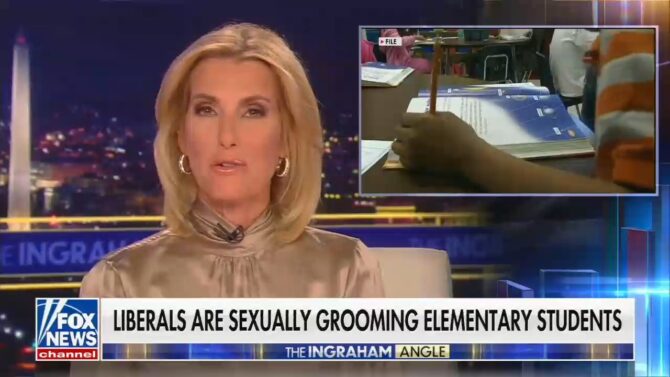 Laura Ingraham leaned extra hard into homophobia during a segment about Florida’s “Don’t Say Gay” bill on her show this week. Now, her gay brother is speaking out.

On Wednesday night’s episode of The Ingraham Angle, the Fox News propagandist dug into opponents of the bill, which bans curricula concerning LGBTQ issues in Florida classrooms, accusing them of wanting to “sexually brainwash” other people’s children.

Related: Laura Ingraham defends Dave Chappelle’s transphobia, even though he called her a “c*nt”

“When did our public schools, any schools, become what are essentially grooming centers for gender identity radicals?” she said above a chyron written in all-caps that read: “LIBERALS ARE SEXUALLY GROOMING ELEMENTARY STUDENTS”.

But she wasn’t finished yet. In fact, she was just warming up.

“Florida just passed a bill to keep this type of sexual brainwashing out of schools,” she continued. “Democrats, though, claim the bill is bigoted, branding it as the ‘Don’t Say Gay Bill.’ Well, nice try. The real controversy, though, isn’t this bill. It’s that schools are peddling gender ideology when our international rankings in math, science, and reading are down across the board.”

Ingraham also aired two clips of individuals who viewers were led to believe are public school teachers, even though don’t appear to be. One is just a random person who never says anything about working at an elementary school. The other says she’s “in pre-school,” which is different from being a public elementary school teacher. Not to mention, the “Don’t Say Gay” bill is specifically geared toward students in kindergarten to third grade and doesn’t apply to pre-schools.

Related: Laura Ingraham’s camp swears moronic “You” segment was scripted but nobody believes her

Ingraham’s brother Curtis, who is gay, has called her “nauseating” and a “monster” in the past. Speaking to the Daily Beast in 2018, he said, “She’s very smart, she’s well-spoken, but her emotional heart is just kind of dead.”

After seeing her homophobic segment this week, he took to Twitter to respond, writing: “My sister has the credibility of a tabloid. Spins like this reveal her deep-seated anger, desperation and complete ignorance of what is actually going on in education today.”

Now, here’s what other people are saying…

the wording may change but none of this is new pic.twitter.com/mOmZPihEv6

.@IngrahamAngle Republican ?stinks regarding “sexual grooming” and abuse of children. I guess that is why you gaslight. pic.twitter.com/D2j2JjBF5p

not gonna make a sexist joke about Laura Ingraham's opposition to good grooming, not me

@IngrahamAngle Is this the grooming you were talking about? pic.twitter.com/ZUdDe0m9yV

“When did our public schools, any schools, become what are essentially grooming centers for gender identity radicals?” asks Fox newsclown Laura Ingraham.

The answers, of course, is never.

On the other hand, Fraulein Laura has been grooming fascists for years.

Fuck @FoxNews and Laura Ingraham and anyone who buys into this nonsense. Literal dumpster fire human beings who should move to Russia since they love Putin so much. https://t.co/6UJ4eyR6PY