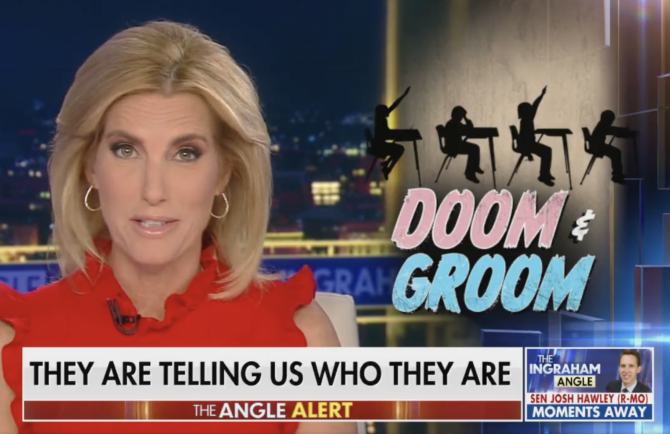 After the Fox News propagandist did a segment on her show in which she cited a Breitbart article that accused schools of grooming preschoolers to be LGBTQ, Curtis took to Twitter to slam his baby sister for being a “Putin-loving monster.”

“This is rich coming from my Putin-loving sister who seems okay with children being killed in Ukraine,” he tweeted this morning, along with a clip from the segment, which aired last week. “Looks like she has a new trope in hand to further rile and anger her followers. What a monster!”

This is rich coming from my Putin-loving sister who seems okay with children being killed in Ukraine. Looks like she has a new trope in hand to further rile and anger her followers. What a monster! @IngrahamAngle https://t.co/KLeG8osGiP

This isn’t the first time Curtis has put his homophobic sibling on blast. Last month, he took to Twitter to criticize a segment she did about Florida’s “Don’t Say Gay” bill, during which she claimed schools wanted to “sexually brainwash” other people’s children.

“My sister has the credibility of a tabloid,” he tweeted. “Spins like this reveal her deep-seated anger, desperation and complete ignorance of what is actually going on in education today.”

In the past, Curtis has also called Laura “nauseating” and suggested she is soulless. Speaking to the Daily Beast in 2018, he said, “She’s very smart, she’s well-spoken, but her emotional heart is just kind of dead.”

So teaching your children and tolerance and acceptance is your problem yet you are silent on active shooter drills in school? Got it

I am concerned for your children

If you are getting your reports from @BreitbartNews, you are sorely misinformed, because @BreitbartNews is not news — it’s right-wing opinion supposedly dressed up to LOOK like news.

😂😂😂😂😂😂😂”Here’s a story I invented to suit my pre-determined conclusion!”

Comrade Laura Laura Ingraham. You are getting closer to making Putin’s Russian News.

What are you talking about? Their innocence got destroyed at Sandy Hook all because they right-wing keeps supporting no gun legislation.

Teaching them tolerance is not a bad thing in any nation on the planet, except here with our extreme right-wingers.

What makes me sick to my stomach is the fact that @IngrahamAngle you are a mother. I can not even imagine the torment that is on a child.

48 republicans voted against a bill that would outlaw marriage to 14 year olds ….. let that sink in for a minute. And who exactly are the party of pedophiles exactly ? Beggars belief.

And you just destroy your children all by yourself pic.twitter.com/MvA0RJIElt