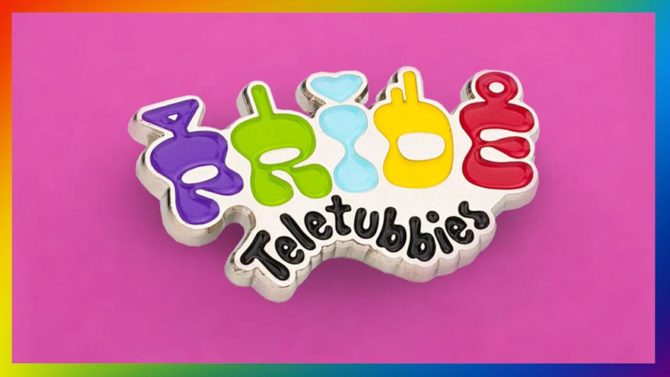 For anyone still questioning the sexual orientation of the popular 90s kiddie entertainers The Teletubbies, the group has appeared to remove all doubt. GLAAD has partnered with the brand to release The Teletubbies Pride Collection this June.

The clothing line–the proceeds of which go to benefit GLAAD–revives several 90s looks including a zip sling bag, reversible bucket hat and knee-high socks as part of a celebration of queer pride and 90s nostalgia.

“The Teletubbies have always embraced their own offbeat quirkiness and sense of style,” said Michael Riley, chief brands officer at WildBrain, the company that owns Teletubbies. “This Pride Month, we’re celebrating that ‘love who you are’ spirit through our Collection of ready-to-rave fashion that makes Tinky Winky, Dipsy, Laa-Laa and Po very proud. We’ve taken the most iconic elements fans know and love about the Teletubbies and designed a playful Collection with fashion flair that we hope fans will love to wear this Pride Month and all year-long.”

For fans of The Teletubbies, the partnership with GLAAD is somewhat ironic. The show came under fire in the 1990s by the Rev. Jerry Falwell accusing the show of promoting homosexuality. Specifically, Falwell claimed the character Tinky Winky was a coded gay character. Falwell noted he sported purple fur and had a triangle on his head–two symbols associated with being queer–as well as carried a purse.

The accusations invited wide mockery, even as LGBTQ people rushed to claim Tinky Winky as one of their own. The character became an unofficial symbol of the community, and jokes about his sexuality became a staple of comedy at the time.

Here’s hoping we see Tinky Winky partying at pride festivals this year, right along side Bert & Ernie, Pennywise, the Babadook and Regina George.