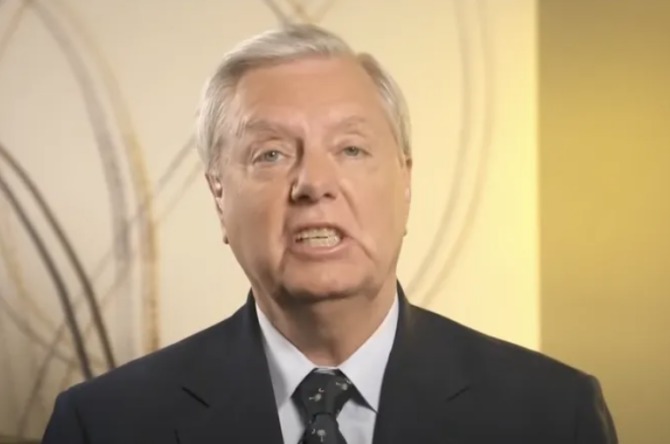 “The radical Left has won President Biden over yet again,” railed the antigay senator. Graham, who was one of the few Republicans who publicly supported Biden’s pledge to nominate a Black woman to the Court, had lobbied for South Carolina federal district judge J. Michelle Childs to get the job.

If media reports are accurate, and Judge Jackson has been chosen as the Supreme Court nominee to replace Justice Breyer, it means the radical Left has won President Biden over yet again.

The attacks by the Left on Judge Childs from South Carolina apparently worked.

“The attacks by the Left on Judge Childs from South Carolina apparently worked,” Graham continued in his tweet. Childs’ record as a labor and employment lawyer in South Carolina came under scrutiny during the decision process.

“[Childs] comes from an anti-union law firm where she spent time defending employers from claims of civil rights and labor law violations,” David Borer, the general counsel of the American Federation of Government Employees, told the Washington Post. “That’s not what we need.”

But Graham wasn’t quite finished blasting Biden’s decision, despite the fact that he was one of three Republican senators who voted to confirm Jackson to her current position on the DC Court of Appeals less than one year ago. And his final complaint immediately failed the smell test.

In a followup tweet, he wrote: “The Harvard-Yale train to the Supreme Court continues to run unabated.”

I expect a respectful but interesting hearing in the Senate Judiciary Committee.

The Harvard-Yale train to the Supreme Court continues to run unabated.

Judge Ketanji Brown Jackson is a graduate of Harvard Law School, and eight of the nine current justices went to Harvard or Yale for their JD. Childs, on the other hand, attended state schools.

No matter that if Judge Jackson is confirmed, she would be the first former federal public defender to sit on the Supreme Court — Graham is apparently more concerned with where Justices get their degrees than when they do with them.

Calling out Graham’s entirely hollow criticism, many commenters pointed out he had no similar complaints about Neil Gorsuch (Harvard) or Brett Kavanaugh (Yale).

Was this issue raised with Gorsuch or Kavanaugh? No? Great. Sit down, Lindsey. https://t.co/AL0Du8Wyio

You didn't mention it once when it was Kavanaugh.https://t.co/tArhoReLU3

The “ Harvard-Yale train” is suddenly important when there’s a Black woman on it.

Remind me, did you have a public outburst about Kavanaugh or Gorsuch and where they went to school? Wonder what’s different here?

Why didn't this bother you when you voted for Kavanaugh and Gorsuch (who not only are Ivy all the way, but even went to the same prep school)?

Supreme Court hypocrisy is nothing new to Graham, of course. When he joined a GOP blockade of President Biden’s SCOTUS nominee in 2016, he held strong that a confirmation should never be allowed in an election year. “I want you to use my words against me,” he said at the time, alluding to a potential reverse scenario where a Republican president had a chance to fill a seat in an election year.

When Donald Trump did get that chance following the death of Ruth Bader Ginsberg in 2020, Graham did a complete about-face. “I am certain if the shoe were on the other foot,” he told Democrats on the judiciary panel, “you would do the same.”