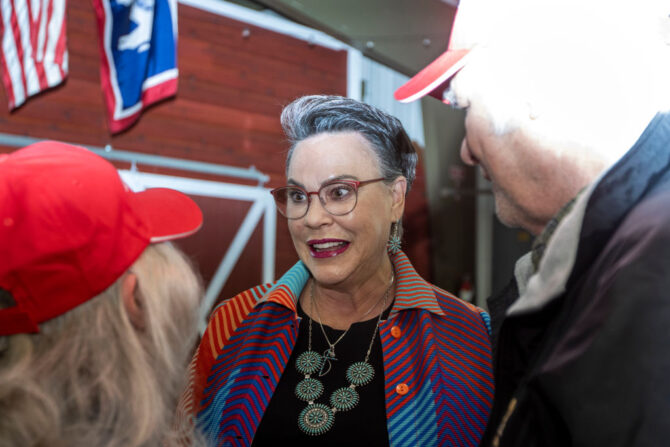 In the least surprising news of the 2022 election cycle, Liz Cheney lost her primary yesterday.

This is what GOP voters in Wyoming chose over Liz Cheney, in case anyone was wondering how the Republican Party was going: pic.twitter.com/7cv9gkvaFP

When it comes to LGBTQ issues, Hageman is horrific. Even more horrific than Cheney, if you can believe it.

In addition to saying she’s “fed up with boys competing in girls sports” and can’t stand “woke radicals” who want to silence free speech, she’s also refused to take a stance on codifying same-sex marriage into federal law, saying it’s not an issue that voters care about.

We’d argue there are lots of voters, especially LGBTQ voters, who care very deeply about it. But we digress.

Hageman has also said she supports all of Donald Trump‘s policies, which, of course, included things like the trans military ban, stripping away funding from homeless shelters that house queer folx, scrubbing LGBTQ people from the 2020 census, slashing health services to those living with HIV, etc., etc., etc., etc., etc.

“He was the greatest president of my lifetime,” she gushed to the New York Times last year, “and I am proud to have been able to renominate him in 2020. And I’m proud to strongly support him today.”

In her 15-minute concession speech yesterday, Cheney, who is rumored to be considering a 2024 bid for the White House, vowed to do everything in her power to keep Trump from ever being elected president again.

“We must be very clear-eyed about the threat we face and about what is required to defeat it,” the outgoing congresswoman said. “I have said since January 6, that I will do whatever it takes to make sure Donald Trump is never again anywhere near the Oval Office.”

I secured her campaign domain and this will be an incredibly disturbing website.https://t.co/al9tfAYzUg

I 100% agree that Harriet Hageman should have won…the role of The Joker in the next Batman movie.

I couldn't find anything! pic.twitter.com/lWHM5giPuC

Raise your hand if you think Harriet Hageman sounds like she should be a villain in a Batman comic.

Related: Everything is crumbling around Donald Trump and he can’t find a single good lawyer to help him out