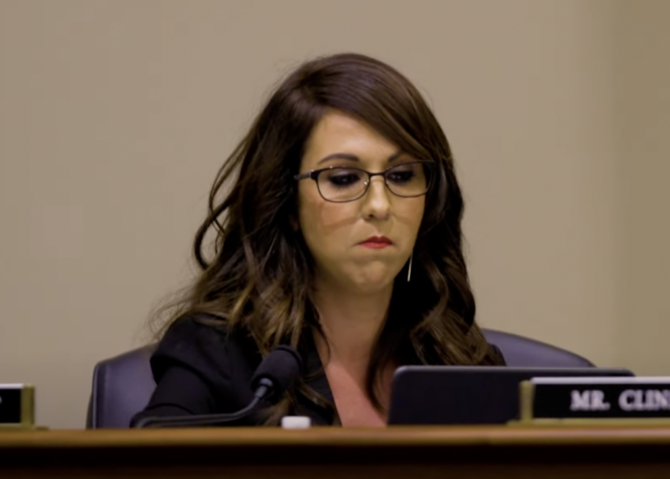 The group responsible for sharing that explicit video of Madison Cawthorn face-humping his cousin says it’s turning its sights towards Lauren Boebert next.

Without divulging too many details, Wheeler says his group has obtained “interesting information” about the anti-LGBTQ congresswoman, whose primary against GOP state Sen. Don Coram will take place on June 28.

Related: Lauren Boebert is having a terrible day on Twitter and it’s all Madison Cawthorn’s fault

Wheeler added that the information is “certainly not as salacious as some of the Cawthorn stuff,” and instead deals with financial matters.

Last week, several former employees of Boebert’s gun-themed diner, Shooters Grill, called her a “monster” who didn’t pay them on time in a report published by Mother Jones.

The employees also alleged that they were paid in cash, with no taxes being deducted, and that Boebert wasted huge amounts of money on things like breast implants, private schooling for her children, and a new Cadillac Escalade.

Last fall, a filing with the Federal Election Commission showed Boebert illegally used campaign funds to cover her rent and utilities bills. She later had to pay back $6,650 to her campaign after using the money to make four Venmo payments labeled as “personal expenses.”

And last summer, the Associated Press reported that Boebert violated ethics and campaign finance laws when she failed to disclose her husband’s nearly $1 million income during her 2020 campaign.

Related: Lauren Boebert says coming out before 21 should be illegal

It remains to be seen exactly how the American Muckrakers PAC will go after Boebert, but Wheeler says he plans to use targeted messages on text and social media.

“We have procured domain names and Twitter handles and we are in discussions with various groups in Colorado that collaborate,” he says.

One of those domain names, Fire Boebert, should go live later this week.

Lauren Boebert will not be a member of the 118th Congress.

Lauren Boebert is going to lose her job just like Madison Cawthorn.

Good! And don’t stop after her. Plenty more to go…

I predict it won’t be difficult to find dirt on her.

Is she in video rubbing her junk in her cousin’s face too?

Who agrees that Lauren Boebert is another traitor that will lose her job next?

Couldn’t happen to a nicer gal.