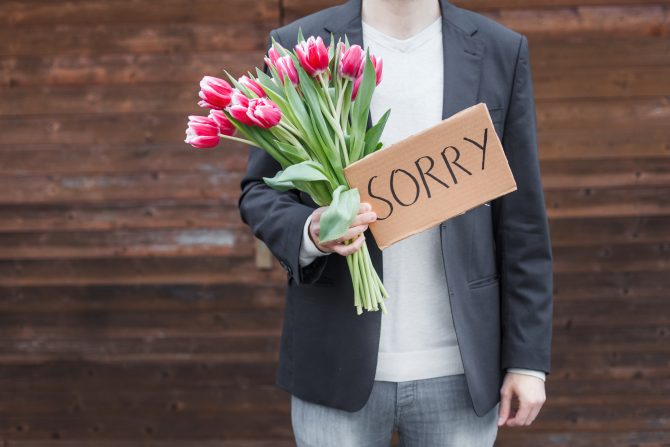 The world is down one homophobe, it seems. After forging new ties with his gay brother and meeting the brother’s partner, a man apologized on Reddit for being homophobic.

Related: Straight dude pens essay about coworker turning him from homophobe to ally

“My gay brother [has been] dating one guy for three years,” the man explained in his February 24 post. “I told him that I don’t want to meet him, because I thought that’s sin. Today, it was my son’s baptism, and he was [the] godfather. He came with his partner. His partner is awesome. I regret I didn’t meet him before. I’m sorry for being homophobic.”

He already defended his brother against his “conservative Catholic” in-laws, too. “I didn’t invite my parents-in-law [to] my kid’s baptism because they don’t want my [gay brother] to be godfather,” he wrote. “They said that [they didn’t] want to come because of that. I told my wife that I don’t care and that I would call my brother and his partner. She was sad because of that, but I really got angry. They are so conservative Catholics. It’s not [the] first time they made fun of my gay brother.”

Now commenters on the post are recommending ways the original poster can strengthen his bond with his brother… and atone for past sins.

“If you haven’t already, you should pull them aside and tell them how much you regret your past actions,” one wrote. “It means a lot to us when people admit their mistakes and express a desire to be better.”

“Hopefully you can set a good example for people around you to just treat gays like humans,” another wrote. “Shocking to look back and see how hard that is for some to do.”

One Redditor commended the original post, writing, “You have show growth and integrity, a good example of a man for your son when he grows older. Be proud of yourself.”

Related: Dear reformed homophobes: Here’s how to earn forgiveness and redemption for past antigay sins

Another commenter, however, isn’t ready to throw a ticker-tape parade for the guy. “I’m glad you finally came around, but if you spent years rejecting him, it might be difficult for him to accept that you’ve come around without questioning your motives,” he wrote. “Be prepared to apologize and say that you were wrong.”

Saying sorry is just the first step, but it sounds like these two brothers may be breaking new ground in their relationship, and the more power to them.