Another day and another dumb tweet from lawmaker Marjorie Taylor Greene (GA-14). This time, the GOP Rep. took aim at the NBA.

Earlier this week, Brooklyn Nets star, Kyrie Irving, who has chosen not to get the Covid-19 vaccine, was informed he would not be allowed to play. The Nets, in line with New York regulations, said the point guard would not play until he can become “a full participant.”

Greene has been vocal in her wariness of the Covid-19 vaccine and is strongly opposed to vaccine mandates. She tweeted “The fascist NBA won’t let Kyrie Irving play for refusing a vaccine. But yet they still let Magic Johnson play with HIV.”

But yet they still let Magic Johnson play with HIV.

Related: Marjorie Taylor Greene is conducting a poll to see if the U.S. should have another civil war

The tweet prompted over over 7.8k comments at the time of writing. Many were quick to point out the ruling had little to do with the NBA. The Nets were forced to act given the NYC Covid regulations (people have to show proof of vaccination to enter bars and other public spaces).

Many more took her to task over her comparing Covid to HIV. Covid can be very easily transmitted through the air. HIV requires the exchange of body fluids, such as via unprotected sex or IV drug use.

Unless Magic was raw-dogging Mo Cheeks in the low post, I think the two analogies are dissimilar.

Hell no, you don’t get to do this.

HIV is not airborn. It is far harder to catch than coronavirus.

Why is America suffering from such idiocy? Why?

He retired from the NBA after finding out he had HIV.

Btw….let us know when there’s an NBA game where players are having sex on the court.

Oh come on Marge! One is airborne, one is not. Put your thinking cap on. Ding…ding….ding…. Covid is the correct answer. I don’t think Magic was going to have the type of contact on the court that would transmit HIV. 🤦🏻

I don’t think the NBA anticipated athletes fucking each other mid-game, so little risk with Magic vs a respiratory virus.

Whoever came up with this “talking point” is a moron.

Tell me you have no idea how HIV is transmitted without telling me.

Well when the “moral” majority thought that aids was contagious they masked up no problem.
Maybe we should tell them COVID-19 is like AIDS?!? pic.twitter.com/cBcJAPBLjG

Not everyone criticized Greene’s tweet. Among those to show support was Florida GOP Rep. candidate Lavern Spicer, who has similarly tweeted about Johnson being allowed to play basketball while having “full-blown AIDS.”

That’s what I said! They don’t give a DAMN about anything but this shot and we have no idea why…

Spicer’s ignorance was also met with plenty of ridicule.

If you think players were at risk of getting HIV from playing basketball with Magic Johnson, the only thing I can say is that “taking it to the hole” clearly doesn’t mean what you think it means. 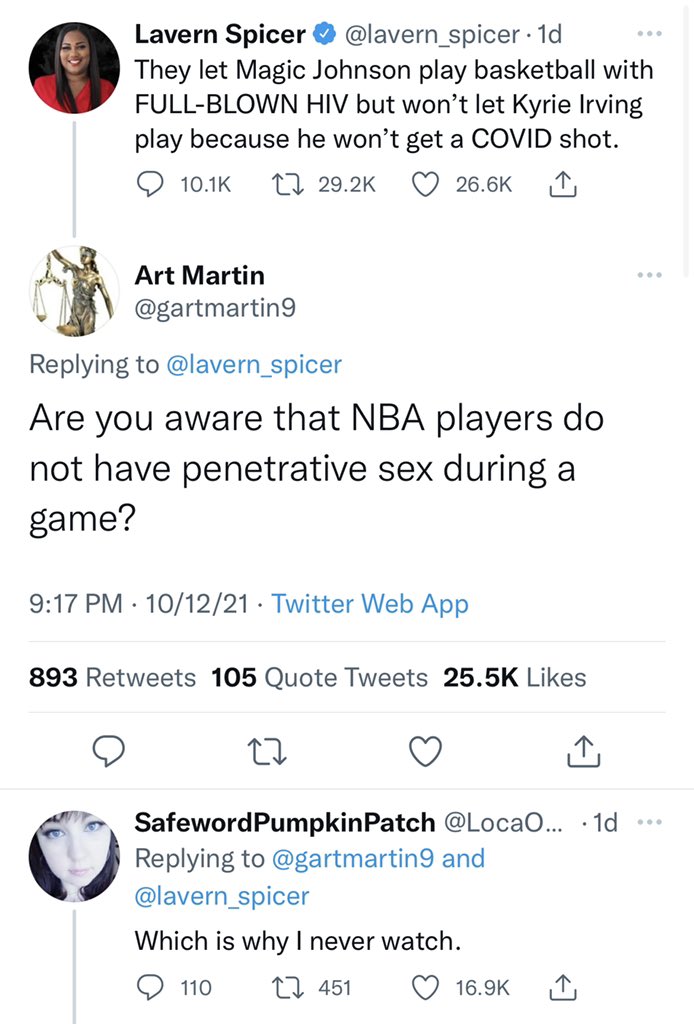