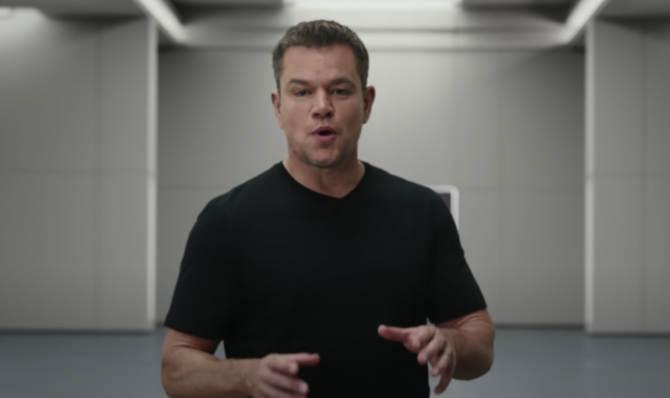 2022 is already off to a wild start. First, Marjorie Taylor Greene was permanently banned from Twitter. Now, Matt Damon has been accused of being a digital con artist for trying to sell cryptocurrency to fragile straight men online. What??

The 51-year-old actor leans hard into toxic masculinity in a new commercial for crypto.com. In it, he compares investing in cryptocurrency to things like scaling Mount Everest, exploring outer space, and… kissing girls?

The commercial has been making the rounds in movie theaters for a few weeks now, but it recently hit social media, where it hasn’t been met with a very warm response.

Evidently, people aren’t interested in hearing a guy who didn’t know the word “f*g” was homophobic until just last year talk about how cryptocurrency will lead them into the future.

In case you forgot, last August, Damon confessed in an interview that he used the “f-slur for a homosexual” until just a few months earlier, when his daughter informed him it was offensive.

“I made a joke, months ago, and got a treatise from my daughter. She left the table. I said, ‘Come on, that’s a joke! I say it in the movie Stuck on You. She went to her room and wrote a very long, beautiful treatise on how that word is dangerous. I said, ‘I retire the f-slur!’ I understood.”

Now, here’s what people are saying about his new crypto commercial…

You may be zoned out during commercials and not have noticed, but there’s an ad with Matt Damon that likens trading cryptocurrency to climbing a mountain and being an astronaut.

saddest thing about Matt Damon's macho-baiting crypto pitch where the viewer must ACT NOW or he's a weak pussy is that this is a top 3 classic pitch all financial schemes have used to goad men into forking over their paltry savings. Nothing has changed in 150 years

It is hilariously telling that the Matt Damon crypto ad depicts all these brave and world-changing events like scaling Everest, discovering continents, the first manned flight, and… kissing a girl.

Getting financial advise from Matt Damon, while reading up on crypto in the dim light of a Gwyneth Paltrow pussy candle.

The most crypto thing ever is the new Matt Damon commercial where they compare themselves to Galileo and Sir Edmund Hillary despite just being a bunch of digital con artists.

Matt Damon seems like much less of a dick than Ben Affleck but this crypto commercial narrows the gap significantly.

Subscribe to Queerty for a daily dose of #life #crypto.com #mattdamon stories and more